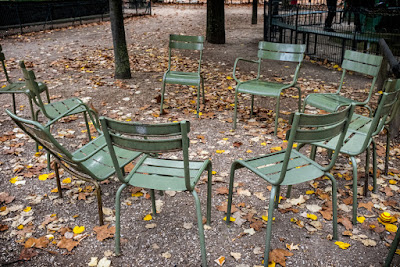 Last night, we watched the 1974 Martin Scorsese film, "Alice Doesn't Live Here Anymore."  I had never seen it.  We both enjoyed the film, but I was a junior in college when it came out and Ili was still many years away from being born, so I think we had different experiences watching it.  She commented on the lack of "things" in the scenery when I said that is what the U.S. looked like then.  She said that now they put up roadsigns everywhere the way they put tags on things like electrical appliances that say "Do Not Immerse In Water."  The movie had the feel of life then, empty and surreal in many ways, closer to an existential experience than you can get now.  There were a lot of empty places that had no "meaning."

So I dreamed my ass off all night long.  Remembered things, really, stuff I haven't thought of for years, things forgotten that I can't remember this morning.  But I was there again, in the "way back", lying in my bed in the quiet nights when you could hear the train rolling through the city miles and miles away.  It was still, man, and the dark was darker and lights were smaller and there was an air of mystery all around.  There weren't lights until the holidays, and Christmas wasn't until after Thanksgiving, and in the blankness and emptiness of existence, the holidays were an oasis of meaning, of sacred and recurring time, an emotional retreat or a dreaded horror, but distinct.

I remembered feeling alone walking through the cold San Francisco streets in 1975, after hitchhiking around the country for a few months out west, walking by a lighted window where a man in a sweater sat in the soft light of his house eating in front of the television, comfortable, safe, and wanting to go home for the holidays to eat turkey and dressing with my girlfriend.  Those streets.  That empty distance.

I could see it all clearly because I photographed it then, the long, empty roads, the small shops and department stores in little towns.  I hitchhiked and rode Greyhound buses and I met people who invited me to their homes.

I think the impact was greater because I have been reading a book on Robert Frank and his experiences around the years he photographed "The Americans."  People's lives were so different form the ones we lead today, and still Frank was reacting to the greed and commercialism he saw all around the country as were the beat writers and poets.  Looking around now, it is hard to imagine, even if you watch "Mad Men."

Ili and I drove through some old towns nearby the other day.  I saw things I want to go back and photograph.  Will I?  That is the eternal question.  Will I even see them again if I go back?

There is a "little league" wrestling event in a very small venue this Friday just up the interstate.  I want to go photograph it.  I would need to find out who to contact to get permission to do that and then see if they would let me.  "Why would they?" I think.  But that thinking is not going to get me pictures of weird America.  It is easier not to try, of course, to tell myself I would not be allowed or that the images would be bland.  I should not write about it here for I certainly damn myself publicly.

Who wants to see images of little league wresting, anyway?

I also saw a roller rink in a town about 45 minutes from my home.  Can you imagine?

There are still things to photograph.  I dreamed them all night long.  Perhaps, though, I am simply a dreamer.  You know the type.

Oh. . . the movie was a real feminist piece right up until the crappy, pat ending.  It showed the lousy side of manhood that was socially tolerated at the time, especially among my class, the lower working class, the Stanley Kowalski school of manhood.

Of course, the movie gave rise to the horrible t.v. show, "Alice."  I didn't realize that until last night.

I, too, was rejecting commercialism.
Posted by cafe selavy at 7:12 AM