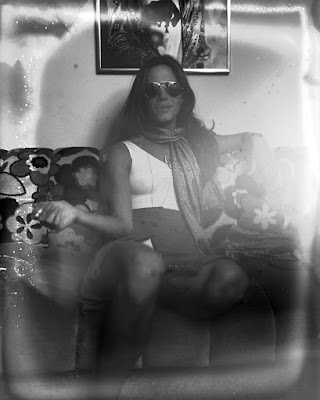 Here's an f'ed up photo from 1974.  I was in my second photography class at the university.  I had become enamored with the large format photography of Edward Weston and wanted to try my hand at it, so I checked out a 4x5 camera from the photo department and gave it a shot.  Trouble was, I wanted to experiment, too.  This is one of those attempts.  I was flashing the lights in the darkroom while I developed the film attempting to solarize it.  Sometimes it was pretty groovy, but sometimes it was just messed up.  Todd Walker, one of the photo profs there, told me I was crazy to use my originals.  I think I was inspired, though, by some of his work. 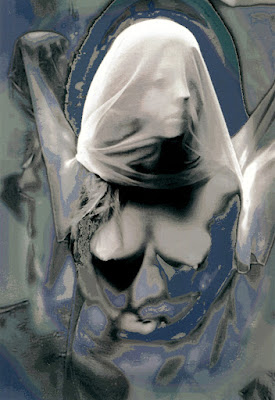 I wasn't familiar with many processes at the time, but I was curious about messing up the images so they didn't look like the photos I'd taken before.  I think I took his advice, though, and quit messing up the original negatives.  And a bit later, I quit using the 4x5 altogether.  I was surprised recently, though, when I began going through my closet full of old work, how many 4x5 negatives I have.  I was a real maniac back then, I guess.

The girl in the photo was one of my photo buddies.  She was from "a good family" down south and had the manners of an aristocrat-turned-hippie.  It was a good time for me, a scruffy boy from a lower class family, as the social barriers between the classes had broken down.  Everybody wanted to be a hippie then, or so it seemed, though the current political situation will certainly put a lie to that notion.  Still, she was a thrill.  I can't recall her name for the life of me now, and it fairly breaks my heart.  We were buddies with another boy named Jack.  Jack's father was a rich attorney who owned most of the coastal real estate in a popular beach town.  Jack was probably gay and at least bi, a Ziggy Stardust boy who was headed to law school.  He was the emotional type, and when he was hung over or wrung out, he would lean against me and whine about his life.  He and she spoke the same language.  I was like a tourist who didn't.  I would watch their lips and try to imitate the sounds, and I think it entertained them a bit.

Sadly, I haven't any photos of Jack.

I've been scanning old stuff, but it is overwhelming.  I've been taking some pictures, too, but they are all throw aways.  I may have lost my eye.  Nothing I take looks very interesting.  As always it is terrible "losing my timing this late in my career."
Posted by cafe selavy at 8:25 AM