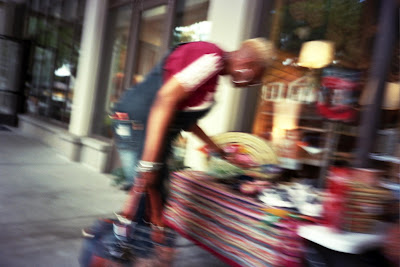 I had a roll of film in my little Olympus XA4, a 28mm lens version of the Olympus XA.  I try to carry those cameras with me as they are the size of a pack of cigarettes but shoot 35mm film and have good lenses.  But I end up forgetting about them and don't shoot through a roll of film fast enough, then one day I pick them up again and have no idea what I have shot with them nor what kind of film they have in them.  Usually they are around shot number twenty-something of the 36 allowed, and so I try to finish it up so I can take it to the lab and see what great things I've done.  And when I get them back, it is just more pictures of my deck or yard or street or houses in the neighborhood, and I wish I hadn't spent the money.

This is a photo from the latest roll.  I didn't know I had slow 100 ISO film in the camera, hence the blur.  It didn't work out for most of the roll, of course, but this one kind of caught my eye.  The colors, I think.  It is just a smudge of color.

I am up at five o'clock this morning.  Fucking time change again.  I thought Trump was going to please the people and end this madness that NOBODY wants.  This is what brings on the flu season, I am pretty certain.  Everybody's body clocks get thrown off and their immune systems break down.

To wit, I am going to Detroit City in a couple days.  Ili has a conference and I am going to tag along.  But Jesus, here is the weather forecast:

Every day of October here was in the 90s.  We've dropped into the upper 80s the past couple of days. Not only are my circadian rhythms going to be off, the weather difference will be great.

I am a paranoid world traveller, anyway.  I stress myself out to the nth degree before every trip.  I've been 'round the world, as they say, but still little trips are trippy for me.

Here is what I found on the internet about Detroit travel.

Winter in Detroit can last from October through April, with the weather being wildly unpredictable during that time. It’s probably best to wait until spring.

You won’t want to walk around in winter. In fact, don’t even come to Detroit in winter.
Oh, and Detroit is America's most dangerous city. As long as you stay within a few block boundary, your chances of getting killed are relatively low. You might get beaten or mugged, though.

Walk down a dark, random street at 2AM with your iPhone in your hand, and someone will probably mug you.

Etc.  Every guide, even the hip ones, tell you not to go to most neighborhoods and that riding public transportation can be dangerous.  What the hell is going on there?  I've been to lots of dangerous places in my life, but not as an old cripple.  With a Leica.  Ili has severe feelings about this.  She will be in the convention hotel Downtown all day while I wander the streets.  Maybe.  I might end up at the hotel bar.

Seriously, though, I will get to go to the Detroit Institute of Art which a friend of mine says is fantastic.  There is the Motown Museum which I am not really excited about, and all the old Ford museums which do not interest me at all.

But I won't know until I get there.  In the meantime, there is a lot of packing and whining to do.

Never underestimate the power of paranoia.  It holds the world together in my experience.
Posted by cafe selavy at 6:30 AM