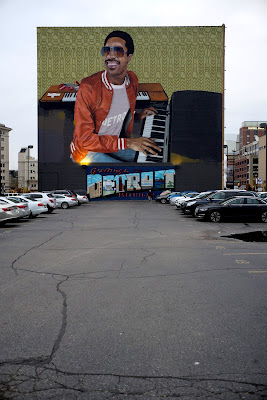 Some sort of depression, I guess.  Probably.  I can't seem to make the pictures I want to make any more.  People look as if they want to kill me when I take my camera out of the bag.  Maybe that's it, or maybe it is something else.  Whatever it is, I couldn't really get going.  I decided to eat some lunch in the hotel bar, a huge turkey club, and then I came back to the room and sat down.  I sat for a very long time.  I knew that this was wrong, terribly wrong, so I pulled together my photo kit and hit the streets.  I used my iPhone to map a route to the Renaissance Center.  It is one of the attractions of Detroit, they say.  I took my Leica M7 with a 35mm lens and my Leica M10 with a 21mm.  The streets looked much the same as they did before, but it was colder and windy in spots.  I tried to follow the Apple map, but no matter which way I turned, I was moving away from the trail.  It said it would be a 25 minute walk.  I'd been walking in circles for that long.

Desolate, I took a few photos of nothing just to be doing something, buildings mostly, but as I was crossing a street, I saw a woman in the crosswalk with the light hi-lighting her, so I clicked one from the waist.  I think she was ready to yell at me, but I did my Mr. Magoo thing and she passed on by.  I tried to wind the shutter, but it wouldn't go.  I had come to the end of the roll.  That is when I realized I'd forgotten to put any film in the bag.  Of course.  What to do?  I decided I would just switch lenses and use the M10, but when I checked it, the battery was just about dead.  Sure.  There was nothing to do but head back to the room.

While I was there, Ili came up from her conference for a minute.  She told me about her presentation which went well, and soon she had to go back to moderate another session.  I sat in a chair.  I sat for a very long time.  The afternoon was passing by.  Despondent, I got up and put some film in my bag and switched the M10 for the Xpan.  This time, I decided to get an Uber.  The streets were empty.  It took only a few minutes to get there.

The Renaissance is a big complex of buildings owned by General Motors.  It is significant architecturally, I've read.  I walked into the big glass entrance and into a GM exhibit of cars.  I remembered, correctly or not, that this was the place they were building in Michael Moore's "Roger and Me."  Anita Bryant and Pat Boone were promoting it.  Yes, I'm sure it was the place.  It felt like it, anyway.  I walked around the steel and glass modernist structure, through the building and out the back that bordered the river.  I could see Canada from there, as they say.  I walked out into the windy cold air coming off the river.  No one was around.  I took a few pictures and went back inside.  I took a glass passageway across the street and into the Marriott Detroit, then down to the street.  I walked a few blocks and crossed back to the river park and took a few more meaningless pictures.  Again, there was nobody around.  I decided to map my way back to the hotel.  And this time, by God, it was straight down the street I was standing on--11 minutes.  Well, that's how it has been going.

I walked toward the hotel again snapping pictures of nothing.  I saw a blonde woman in a black coat turn to look at me.  I wasn't even taking pictures at that point, just holding my camera.  But she turned and. began walking toward me.

"Oh," she said, holding up a bag of hamburgers.  "I'm feeding the homeless."

I smiled and said, "Well, you are a Good Samaritan."

I was in for it now, but what else did I have to do?

"Where are you from?"

"Are you from Detroit?"

"How long have you lived here?"

"Well. . . I don't want to give away my age, but. . . I'm forty-something.  I was born in Arizona on an Indian reservation, but I was adopted--illegally, by the way--and brought to Michigan."

"So you've been here through all the ups and downs."

She started telling me about how bad it had been.  All the white people left.  All that was left were drug addicts and bums.  Then the conversation kind of turned.

"You know, they can call us whiteys and racists and crackers, and that's supposed to be o.k., but we can't say nothing.  Well, sometimes you've got to be tough with people.  They've started cleaning up the streets and white people are starting to move back in.  The mayor, he's kind of a gangster, you know, but he's really cleaning things up.  They say Trump is a racist, but why?  Because he's got opinions?  I liked Trump way back, you know.  He's not afraid of anything.  Sometimes you have to make sacrifices for you country.  In the good days, that's what people did.  You just have to suck it up sometimes."

I was having trouble following along, but I smiled a stupid grin as she got more and more animated, swinging her pointed finger around in the air.

"He'll probably get re-elected," I said.

"I hope so," she said, and then she went on a tirade about elite liberals that is what many of the opinion pieces in the NY Times have been saying about the "woke."  I know that they are right.  The "Woke" generation will get Trump elected once again.

An old African American man missing his front teeth, top and bottom, came up with a cup and asked if we could help him out.

"Are you hungry?" she said holding out the hamburger bag to him.

"No, mam, I need some money.  You will surely be blessed.  I will say a prayer for you, and my prayers have power.  I will pray for you."

"You know you need to get off that shit," she said to him, not meaning religion.  "It is going to kill you."

She was pulling out her wallet and digging out some bills.  I shamelessly put my camera to my eye and took a photo.

"I shouldn't do that, but people need help."

"They sure do.  These are tough times."

"It is hard to get a job in Michigan if you've been convicted of a felon.  I've been charged six times.  But I'm educated, and I know Darwin and how we came up from the dirt, and he left room in there for God, so I think people have a chance.  They can change."

She said that she had had a hard life.  She was adopted, she told me again, "Illegally," and she had been sexually abused until she ran away at 13.  Life on the street was hard, but she was determined, and she went to college.  She got married to a "big-time drug dealer" who got killed.  She had two children, both of whom had been to college.  She brought them up in the suburbs.  She wasn't going to have them around drug addicts, she said.

Then she told me that she had been in prison for two years.  Battery, she said.

I tried to imagine her prison experience.

We were walking now.  I needed to get back to the hotel.

She kept walking with me until we got there.

"So you're staying at the Weston, eh?  Nice. I used to have money," she said, showing me her expensive watch.

"O.K." she said as I stepped too the front steps.