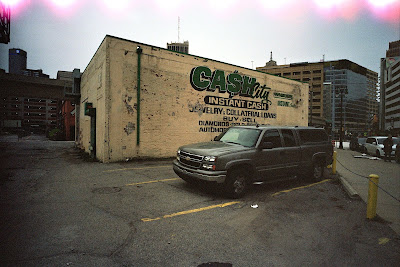 Here's one of the Detroit photos from the roll of film I opened without rewinding.  You can see the light leaks at the top of the frame.  It's a shame.  There are some pretty good shots that were ruined.

The weather here continues to be stunning.  The light is almost too bright.  You cannot look at a reflection without getting burned spots on your retina where the visual purple gets depleted.  You can look that up.  It is a vestige of a memory from my zoology courses.

I have begun reading "Whatever" by Michel Houellebecq.  I sent around some quotes last night to friends who are in disbelief that I have never read (nor heard) of him before.  Here is how the novel almost begins.

Friday evening I was invited to a party at a colleague from work’s house. There were thirty-odd of us, all middle management aged between twenty-five and forty. At a certain moment some stupid bitch started removing her clothes. She took off her T-shirt, then her bra, then her skirt, and as she did she pulled the most incredible faces. She twirled around in her skimpy panties for a few seconds more and then, not knowing what else to do, began getting dressed again. She’s a girl, what’s more, who doesn’t sleep with anyone. Which only underlines the absurdity of her behaviour. After my fourth vodka I started feeling pretty groggy and had to go and stretch out on a pile of cushions behind the couch. A bit later two girls came and sat down on this same couch. Nothing beautiful about this pair, the frumps of the department in fact. They’re going to have dinner together and they read books about the development of language in children, that kind of thing. They got straight down to discussing the day’s big news, all about how one of the girls on the staff had come to work in a really mini miniskirt that barely covered her ass. And what did they make of it all? They thought it was great. Their silhouettes came out as bizarrely enlarged Chinese shadows on the wall above me. Their voices appeared to come from on high, a bit like the Holy Ghost’s. I wasn’t doing at all well, that much was clear. They went on trotting out the platitudes for a good fifteen minutes. How she had the perfect right to dress as she wished, how this had nothing to do with wanting to seduce the men, how it was just to be comfortable, to feel good about herself, etc. The last dismaying dregs of the collapse of feminism. At a certain moment I even uttered the words aloud: ‘the last dismaying dregs of the collapse of feminism.’ But they didn’t hear me. Me too, I’d clocked this girl. It was difficult not to. Come to that even the head of department had a hard-on. I fell asleep before the end of the discussion, but had a horrible dream. The two frumps were arm-in-arm in the corridor that bisects the department, and they were kicking out their legs and singing at the top of their voices:

If I go around bare-assed
It isn’t to seduce you!
If I show my hairy legs
It’s because I want to!

He's a cynic, I see.  I will probably enjoy the writing more than I thought.  He is probably the sort that gets a kick out of the health benefits of aging.  Ha!

I love the woke generation.  They have changed my mind about many things.  This is not one of them.


“I don’t think, any longer, that it’s enough to say, ‘Oh well, that’s the way they did it back then,’ ” he said.
“He was an arrogant, overrated, patronizing pedophile, to be very blunt,” she said. If his paintings were photographs, they would be “way more scandalous,” and “we wouldn’t have been accepting of the images,” she added.
“What’s left to say about Gauguin,” she added, “is for us to bring out all the dirty stuff.


Wait until they dig up some dirt on Norman Rockwell.  Wait.  Hasn't that already been done?
Posted by cafe selavy at 7:13 AM