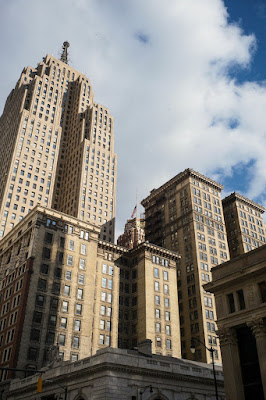 Fucking Detroit City.  This place is unbelievable.  There are buildings and streets and a couple people.  It is a ghost town or a set ready for a play.  I don't know, but it is the damndest place I've ever seen.

I don't know what to do here, of course, so I consult the online guidebooks.  Oh, they say, Mexican Town is a must.  All of them do.  So I'm jacked.

"What do you want to do today?" I asked Ili when we were having coffee at the Detroit Club.

It is easy.  You either go through a tunnel or across a bridge.

"Let's rent a car and drive ourselves," I say.  "There are sure to be a bunch of rental car places in Detroit."

Sure there are.  They are all at least half an hour away.  Most of them are at the airport.  Or airports,  I should say.  They are at the Windsor airport, too.  Come to find out, though, that there are lots of conditions for taking a car across the border.

So we pack up our bags and check out of the Detroit Club and roll our stuff a couple blocks to the Weston.  As Ili checks us in, I ask the Concierge about getting to Canada.

"You can take the bus.  It's two seventy five."

"What is there to do in Windsor?"

There are three casinos in Detroit.  I'm not a gambler, but I might go to one just to go.  It seems, however, that the main reason to go to Windsor is to sit on a bench on the river and get a good view of Detroit.

Ili called an Uber and we stepped out into the cold.

"Hi there.  What do you know about Mexican Town?"

The Uber driver looked at us.  "Why do you want to go there?"

"That's what all the guidebooks say to do in Detroit."

"It's full of Mexican restaurants.  Don't you have any of those where you're from?"

She was a fun lady.  She dropped us off on "the strip."  It was about three blocks long.  There were at least ten Mexican restaurants.  They were working on the street, bricking it and doing the whole shebang.  Funny thing to me was that there wasn't a single Mexican on the crew.  Back home, they are the best brick layers and masons you can find.

We found a restaurant and had our fill for about ten dollars.  Then we drank a bunch of sangria and had two deserts and quadrupled our bill.  Fun.

Our waitress was the only non-Mexican in the restaurant.  She scared the shit out of me.  She was the size of a nine year old, cute, but sort of mechanical.  Both arms were tatted up as far as I could see.

"I'll bet you anything she has a brother in prison."

Ili made the big "shut-up" eyes at me.

She knew right where to send us.  Last night at the Detroit Club bar I spent over a hundred dollars on drinks.  I didn't plan on not having a bottle of scotch in the room tonight.

When we went out, it was snowing.

We walked up the three blocks of Mexican restaurants and through an old neighborhood with beautiful wooden houses in terrible disrepair.  Then we came to the street the liquor store was on.  It didn't look good.

"Sure it is," I said as I slipped my camera into its bag.

We passed the usual fellows who hang around the outside of liquor stores in the bad part of town and went in.  It was like a mini mart with a long, bullet proof glass window.  That's where the kept all the liquor and money and employees.  We were on the other side of the glass with some fellows drinking beers out of paper bags.  Ili smiled and said hello.

"Whoooweee," one of the fellows said.  She might have been the only blonde to come into the store in a long time.  Suddenly, the Middle-Eastern fellow behind the bullet proof glass was yelling at the fellow blocking my view of the scotch.

The fellow was a burly black guy, and he didn't like being yelled at, and I think he was blaming me.

"What the fuck!  You as bad as them white folk in town."

And then it started.  A big fellow, maybe the owner's son, stepped around and began talking to the black guy.  Everybody else was bunching up kind of nervous like.  Not being from here, I didn't really know how to read the room, and I couldn't tell how bad it was going to get.  But the big fellow got the black guy to go outside, and I was able to put some wine and other as sundries onto a bullet proof Lazy Susan that took the stuff onto the other side.

She'd already called an Uber.  We stepped out and the fellows who were inside were now outside.  We stood on the corner waiting for our ride.  When we got in, they let Ili know that they appreciated her.  They were real fans.

Our Senegalese driver got us back downtown and to our new hotel.  The streets were dotted with the occasional human.  The sky was gray, and the air was cold.  We decided to have a scotch.

"Don't you think its kind of racist to call something 'Mexican Town?'"
Posted by cafe selavy at 7:28 AM