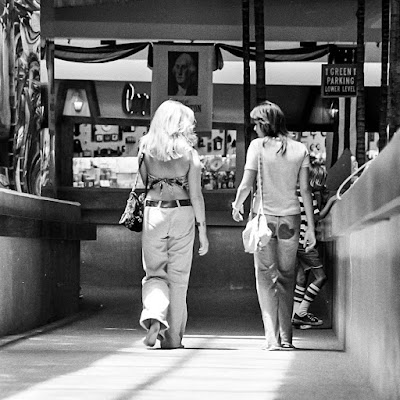 Christmas shopping at the mall, 1975.  I swear, the girl in the halter top is barefoot.

I hate Christmas shopping.  But in 1975, malls were a newish thing, and they seemed fun.  There was a Mr. Dunderbach's restaurant at "our" mall.  I don't know if they have them everywhere, but a few years ago I ran across one in S. Carolina.  They sold the best sandwiches in the world, but you could only get two beers before they cut you off, and they were small ones at that.  Afterwards, you could get an Orange Julius.  There was that and "people watching."  You were allowed to do that then.  If you stared at a pretty girl, she might say, "Take a picture.  It lasts longer."

I tried that.  You get yelled at now.

Back then, though, everybody went to the mall.  Shopping was a new thing in the suburbs.  There were hair places and Glamor Shots.  They still sold those big organs and somebody was always sitting in the front of the store playing one.

What happened to all the organs?  Are they like IBM Selectrics now, expensive and difficult to find?

Mall Culture has died.  All that is left are the photographs.

Ili and I said we would not buy one another presents this year.  We will get the big Chatham prints framed instead.  Neither of us like things that are obligatory.  But my mother. . . well, that's another matter.  I must get her something, but I haven't a clue.  It will have to happen tomorrow.  In the rain.  It will rain for two days, they say. 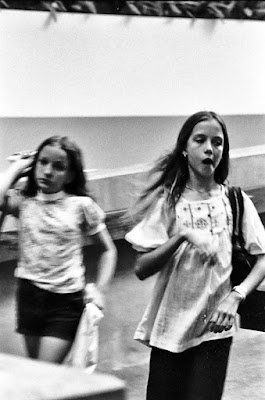 They are tearing down one of the last remaining malls in this town now.  They tried to revitalize it, but the project was a failure.  Where do teenagers go to get away from their parents now?  I guess I'll have to ask the former Governor of Alabama. 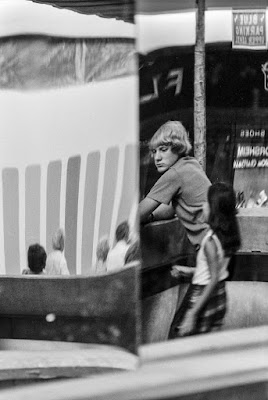 Look at this, reflections and all that shit.  I was an artsy fucker like Saul Leiter.  Way back then in 1975.
Posted by cafe selavy at 8:45 AM