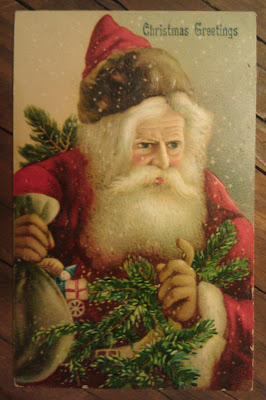 I'm not sure Santa is going to make it to my house this year, but it's o.k.  I'm at my mother's for the eve.  I did get a text from one of the miscreants to come meet for drinks on the Boulevard, and mid-afternoon, I went.  There were three guys at the bar, one of whom I did not know.  And that was it for the rest of the afternoon--just us.  In the past, this was big, bigger than that.  It came from a tradition I had begun long, long ago, but over the years, it morphed and was hosted in different bars around town.  Obviously, it had dwindled.  The four of us were solo.  Of those who did not come, none even bothered to text that they wouldn't be there.  And for the first time ever, there were no women.  Single men talking of the past.  What could be worse?

Later, I went home to pack up my things and to pick up the many presents I had gotten to take to my mother's house.  Now, we have finished the dinner I made a bit ago, and my mother has gone to a neighborhood party down the street.  I am sipping the first whiskey of the night.  Later, we will open presents and watch some Christmas thing on television.

There may be no point yet, but it is early in the narrative.  Perhaps in days or weeks, or even months, it will make sense.  It could take some time, you see, for it is a story that is told over time, not in a single sitting.

So kick back and drink your eggnog and rum or your own version of scotch.  I'm thinking of all the people I know and have known, and I'm thinking of how things have turned out for them.  It is a very mixed bag, of course, but tonight the ones who have succeeded or seem to have from a distant observation point stand out.

I'll let you know tomorrow how it all works out.
Posted by cafe selavy at 9:40 PM