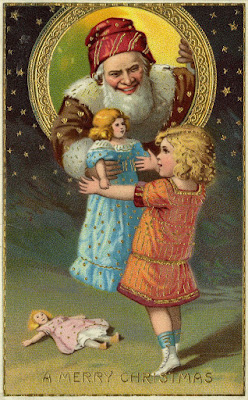 It is six a.m. on Christmas Eve, and I've been up for an hour.  It is still as dark as it was when I got up.  I've been sleeping past sunrise "on the reg," as the kids like to say, but I guess some sugarplum or dollop of spice has gotten me up this morning.  So. . . I've been rolling around the internet reading the news they've seen fit to publish for the early riser, then just surfing for interesting posts.

The internet is not nearly as interesting as it used to be.  They've killed it off, sanitized it, made it a tool of the oppressive kingdom.  It has become policed and politicized until it is as useless as the t.v. or, worse, the radio.  Internet excitement resides with porridge-headed people and their "gone viral" video clips.  I could find nothing to excite my increasingly dullard brain.

Even Christmas feels obligatory and worn out and something to get through and be done with.  I can't muster up another relived emotion.  And maybe I'm not alone.  The Christmas cards have not poured in this year, and the annual Christmas Eve gathering of orphans and lunatics on the Boulevard has not been announced.

But I should not universalize my experience.  Maybe others got many cards, and maybe this year I was just left out.

I must do some marketing today and pull together a Christmas Eve dinner for my mother and myself.  And a Christmas dinner, too.  I will stay at her house and we will open presents and watch television. I will need some serious medication.

Sunrise is still a long way off.  Maybe I'll go back to bed and see if I can dream.
Posted by cafe selavy at 6:29 AM