I went to the factory, went to a meeting, then worked all afternoon cleaning out my office.  I went through some documents from a time when I was an expected star of the literary criticism world.  I know. . . of course. . .  but seeing the documents from that time hit hard.  So, mopey and desultory, I ate my lunch in the break room with my secretary, my boss's secretary, and a woman who runs the data department.  Oh. . . we have a lot of data.  We are all fond of one another, and they know of my woeful tale, the one I a currently living through (or through which I am currently living), and they tried to cheer me up.  I told them many truths, and they had many suggestions.  I love them for it, but when we left the building for the weekend at quarter 'til five, they were going for some weekend fun, and I was heading home to a smokey scotch alone on the deck and the specter of dinner.  I wanted sushi, but the flu is about and that is the last thing I need right now in my physical and emotional state.

On my way home, I received a cheery text from my boss's secretary that included a song called "Hemingway's Whiskey" (link).  Well. . . it is not my music. . . and Hemingway didn't drink whiskey.  So I said.

Don't forget that I was looking through the documentation of that just hours before.

When I opened the text, I was already home, sitting on the deck with a smokey whiskey and a stray cat who comes to sit with me now from time to time.  I took a photo and sent it to her. 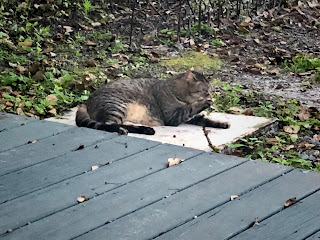 It changed my mood.  I finished my whiskey and headed out to chance the sushi. 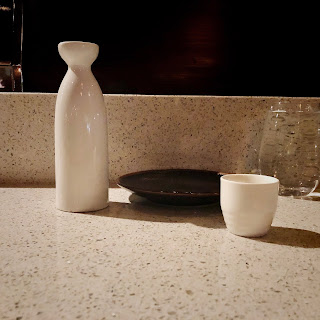 We'll see how that works out, but I was happier for awhile.

I know, I know. . . it was Jeffery Epstein's favorite song.  Whatever.  I get it.  The worst thing that can happen to people is sex.  I agree.  It has ruined my life.  I think about if I had just stayed a virgin and had kept my nose to the grindstone and done my work.  How much happier I'd be now.

I watched a Netflix comedy special (I think) with Michelle Wolf.  She kind of knocked me out.  She is my kind of feminist.  I'd not heard of her before, so I Googled her and found this.