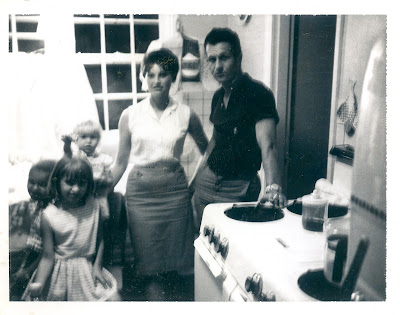 You're tired of my whining.  I'm tired of it, too, so I am going to change gears and post old family pictures I've been scanning because I have nothing else to do but mope and be anxious and be depressed and whine.  The pictures pick me up a bit, or at least they distract me from the present, and perhaps that should be a function of photography.  They are naive photos made by my father who was a very bad photographer and by my mother who was hardly better.  Once in a while, though, they got close enough to their subjects to see something of interest.  Rarely, but sometimes.

My father rarely photographed me or my mother.  There is not much of a record of us.  He photographed things and other people.  His "things" photographs are horrible, made mostly with cheap plastic cameras that had no focus or exposure controls.  They were forerunners of the Diana and Holga cameras made to take pictures in bright sunshine.  You just looked through the shitty viewfinder that was never very accurate and push the button.  Usually the subjects are vague, blurry, and canted suggestions of "something out there."

That is true for the most part, but when I was about nine, he bought a Polaroid instant camera.  It astounds me for he didn't like to spend money on things.  He and my mother both grew up poor and worked for every penny they ever got, so they didn't like to let go of it.  I'll tell you more of that over the days and weeks, I'm sure.  But his buying a Polaroid, and then buying the film which was expensive even then, stupefies me.  The camera used the peel apart film that had to be coated with the little plastic and sponge thing soaked in fixer.  I'm sure it was toxic as hell.  When the photo came out, you had to take the sponge out of its little plastic tube and run it over the picture a couple times.  The photos I have scanned were not coated well enough or, perhaps, all old Polaroids begin to brown.  I don't know.  But I will accept the degradation as patina and enjoy them as they are.

I have to write this without looking at the photos I'm posting because I made a mistake.  I am writing from the hipster coffee house and thought I would download the pictures I needed from the emails I sent to my mother before I left the house.  But I can't because I didn't send them from this computer and fucking Earthlink (yes. . . I still have an account) doesn't let you see what you sent from one device to another.  They charge a lot for that privilege.  So fuck me.  I'll write from memory and insert the photos later before I post. 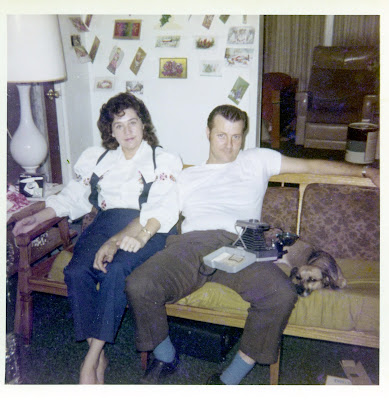 These are photos of the two sides of my family.  One side, my mother's, were Ohio hillbillies living in a small unincorporated township off the highway.  That is where I was born.  The other side, my father's, were more citified, living and working in Dayton.  Many of them were bona fide criminals with credentials.  I was lucky that my father was the good kid in the family and lucky that he moved us to Florida when I was five so that I was tempted by neither hillbillies nor criminals.  At least not ones to whom I was related.  The kids I grew up around were both, but there were degrees of separation.

The black and white photo is of my father's brother's oldest son.  As you can see, he was a real greaser/looker.  He was married to a woman who cooked all the family meals but would only eat her meals off salad plates.  No over eating for her.  People weren't flocking to gyms back then, but you can see she pretty well kept her figure even after three kids.

I'll have tales to tell about Eugene, I think, if I sustain this.  He is a tale worth telling.

The other photo is of my mother's brother and his wife.  A different look, a different life.  But don't let that lazy demeanor fool you.  That boy was growing marijuana on the farm in the 1960s.  It's an old hillbilly story, though, moonshine and marijuana.  There has to be a better way of making a living that working.

Both my cousin and my uncle married Kentucky women. . . if you know what I mean.  They are tales all  on their own.  Again, I hope to tell a few of them.

The coming days and weeks will be full of captains hats and blonde wigs and women posing their fulsome behinds for the camera.  There will be motorcycles and boats and travels through old Florida before the Age of Disney.  And there will be me, the kid, barefoot and shirtless with a cracker burr cut, bad teeth, and the body of a malnourished tarantula always trying to do something to fuck up the photograph.

There was something wrong with me.  It will be obvious.
Posted by cafe selavy at 8:45 AM