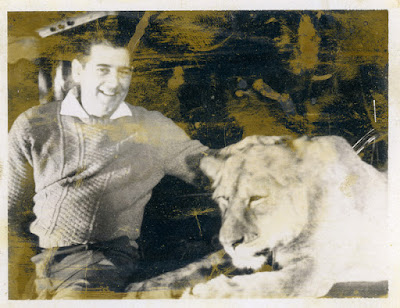 I wish I had some new good pictures for you.  I really do.  But I haven't touched a camera in a really long time now.  This is my dad with a lion.  It looks like I did on morphine in the hospital.  They must have really kept that thing drugged.  But fuck. . . it was the early '60s.  Hippies hadn't fucked everything up yet.

Good old dad.  He had me convinced that he was Tarzan.

Ili moved the rest of her stuff out today while I was at the factory.  I took a Xanax.  When I got home, she hadn't even left a note.  I've been cancelled as the kids say.

Q asks me if I deserved it.  If we all got what we deserved, I told him quoting William Muny, we'd all starve to death.  I guess that's true.  As we are probably told biblically, who among us is blameless?  I don't like to cast stones.

But where in the hell is H.S. Thompson when we need him?  What a fucking heyday he would have had with Trump.  There is nobody like him anywhere today.  No such Gonzo insight, no such prose.  We are stuck with literal assholes who tell us that Trump is bad.  No shit?  Where is the art in that?  Where is the genius?  We live in a prosaic society devoid of imagination, finding danger in sex and spouting righteousness.  They can only get away with it because there is no good Dr. Gonzo.

But as he said, the hogs are greased and out of the pen now.  Mitch McConnell will have his pound of Vaseline.

I'm in trouble tonight.  I found that chocolate goes very well with scotch.  You may find it unlikely, but it is true.  The two seem made for one another.

I will not be going to the factory again for awhile.  Maybe hardly ever.  I have done what I have needed to do, and now it is someone else's turn.  Now I need to find my way.  I wish I were whole, but don't we all.  Half a man is still a man, they say, and I will have to learn the truth of that.

As Hemingway so famously said, “It is awfully easy to be hard-boiled about everything in the daytime, but at night it is another thing.”
Posted by cafe selavy at 7:14 AM