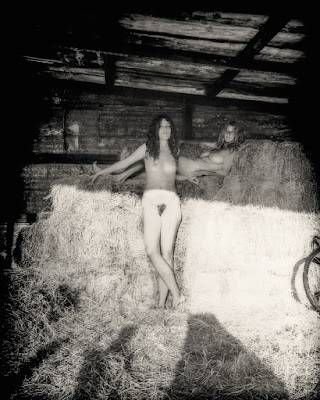 I didn't go away to college right after high school.  Hell, there was no expectation that I would go to college at all.  That was nowhere in the family tree.  So when I stumbled into enrolling in the local community college, it was an unanticipated novelty in my family.

"Well," my father said, "No one can take that away from you."  He was correct, of course.  Nobody wanted to.

After two years of going to college in my own hometown, however, I matriculated to the largest and most prestigious state college. . . well, in the state.  Nothing in my life to that point had prepared me for what would happen next.

It was intimidating to be in a town whose population was dominated by people my own age.  Everywhere I looked, there were kids cooler and more educated than I.  I had never been a cool kid, and though I was smart, I'd missed 180 days of high school and had never been introduced to any of the finer ideas in life.  My high school was meant for miscreants and dolts, sons and daughters of cracker and hillbilly families, or partial families, semi-employed or working manual labor.  Education was not a priority, at least for the majority of us.  Management was.  They just tried to keep us from committing major crimes.

My friends were all high school dropouts and thugs.  A college town was not their kind of place.

When I got there, however, I went in balls deep, as they say.  It was lovely in every way.  The skies were bluer and the air more temperate, and everywhere you went something magical was occurring.  It was a mythical town in the middle of the cracker south.  Anything could happen.

Somehow I was invited to a party thrown by a lesbian couple who lived on a farm outside of town.  At the time, I was in a photography class and had decided to be THE ONE who learned to work a large format viewfinder camera.  A 4x5, to be exact.  Well, not exact because I don't remember the brand of the camera or the lens.  But I was enamored with the Daybooks of Edward Weston, and  I wanted to be like him.  I was supposed to bring my camera to the party.  I took the 4x5.  When I think back, I wish I'd taken my 35mm, too.

I remember being a little freaked out by everything when I arrived.  I was, perhaps, taken by surprise.  Many people were naked, and many people were openly gay.  There were no gay people where I came from, only "queers" who had to hide their "pervertedness" one way or another.  I had never encountered happy homosexuals.  But people were happy.  There was beer and marijuana and some LSD, too.  We had all that where I came from, but not so much in the daylight.  Everything was in the daylight here, though.  I had entered a different world.

The lesbian couple wanted me to photograph them in their hay barn.  They were drunk and fucked up, but they were cool, happy, and fun.  I wanted make pictures that would please them.  I guess I desired their approbation. 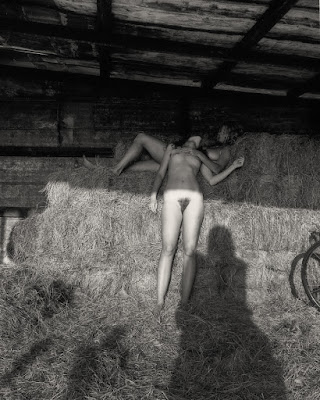 I didn't do a very good job.  I am surprised, looking back at these negatives, that I was able to get images at all.  I still have a difficult time with large format equipment, but most of the exposures I made back then were right on.

Back then was 1975, but you know that by the grooming. 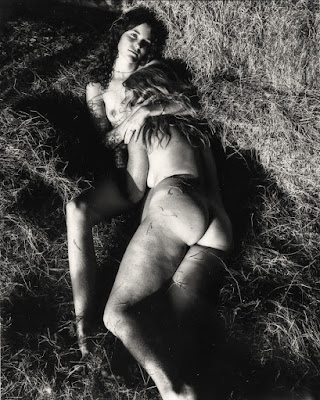 By late afternoon, people were really fucked up, and since I was neither drinking nor smoking, I was ready to leave.  I'm sure the party went on all night. 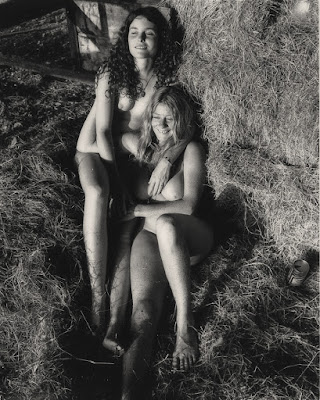 As you can see, I was no Edward Weston, but I am impressed that I even tried to be.  There is a kind of jolly elegance and innocence in the lesbian couple, and though I don't imagine that they spent a life together, perhaps they did.  Those were turbulent times, but maybe somehow they made it through together.  We can only hope.

Have you ever seen the movie, "Fritz the Cat"?  When it came out, I saw it and went, "Yes, that is it!  That has been my experience here."

These women were older than I at the time, so they would be close to seventy or more now.  I wonder how their lives played out?  I wonder if they remained happy, together or individually?  I'm sure that day had a significant effect on my psyche.  That day, I encountered people who were wiser and more experienced than I.  I was there.  I produced.  I felt I was something in the cosmic scheme of things.