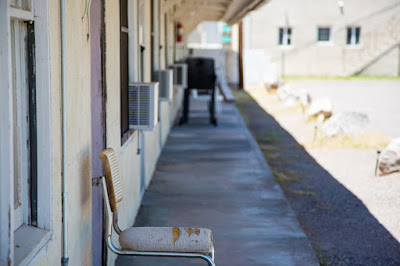 I can't sleep any more.  I was sleeping fine, then suddenly, I wasn't.  I am not sure I really sleep at all. It feels more like thinking thoughts that I don't control.  The dreams, things I never used to remember, are becoming more disturbing.  Why, for instance, was I dreaming of Michael Jackson last night.  I woke with a sore throat at 12:30, got up and took some Umka.  Then at 3:30, I got up and drank more water.  At 4:30, I took two Tylenol and more water.  I got up at 5:00.  Each time, I remembered what I was thinking/dreaming.  Much of it is about the future.  My future, to be more precise, or to hone in more, what little future I may have.

Maybe I should get a night job.

When I got up, the house was cold and dry.  It is near freezing outside, and my old wooden house leaks like a sieve.  The heater has been running since I got up and turned up the heat, but the house is not warming.  These old cracker bungalows were not built for the cold.

Yesterday I did some shopping for things I need.  I washed the shower curtain liner.  A man came and cleaned the drier vents in both the house and the apartment.  It is different doing chores alone and doing chores as a couple.  I don't know.  I felt an accomplishment somehow.  I made a list and everything.  Went to several stores.  Even bought an accoutrement the I've needed.

And to top it off, I got more of my welfare taken care of.  Next thing you know, I'll be filing my taxes on time.

But there is still much to do.

One chore that is more difficult now is preparing meals.  Cooking for one is a drag.  There is something satisfying about consensual cooking and cleaning.  Drinking wine while making preparations.  Sitting down together and moaning with culinary pleasure.  Making quicker work of a messy kitchen.  Pouring the after dinner drinks.

Last night, I ate the leftovers from the Sunday dinner I made for my mother for a second time.  Three meals of rice and beans in three days.  I am throwing the rest away.  I can't face it again.

Q sent me a link to Paris Hilton's YouTube cooking show.  I watched it last night.  There is something wrong with her neck.  When she talks, her head tilts always to the right.  Watch it and see.  It will drive you crazy.  It is important, people, to keep a straight neck if you want to be taken seriously.  Imagine Obama doing something like that.

Afterwards, I watched a promo for her upcoming YouTube for pay documentary.  It is about the trials and tribulations of Paris.  People don't know what she has been through, but they will.  She is not that character she plays on t.v., she contends.  She is a serious and successful person.

Well, who can argue with that?

Afterwards, I watched a few of her sex tapes.  It didn't look like she was being serious.

Later, I watched the first episode of the new season of "Curb Your Enthusiasm."  It was Larry David's take on the #MeToo movement.  Let me know if you were entertained or got pissed off.  There seems to be no middle ground any longer.

I watched the Impeachment for a bit.  They were saying the same things they've said on all the opinion news shows.  Without witnesses, this should only take about an hour, but they will stretch it out to get some airtime.

I turned it off and read.

And that is the exciting life of a new old bachelor.  All I've left out is my interaction with the cat.  Poor thing.  But she is fat enough to withstand this cold spell.  A fat, feral cat with a domestic cat for a boyfriend.  Things are just weird.  I'm not making that up.
Posted by cafe selavy at 7:07 AM