The Past Is My Future 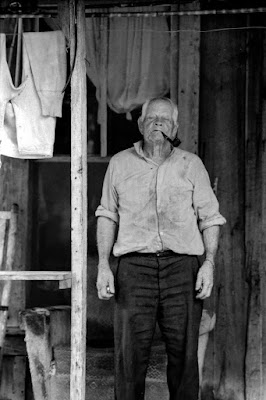 This is what my future looks like, I think.  It is how I feel today, anyway.  I shot this in 1974 somewhere between Gainesville and Cedar Key.  The fellow was sitting on his porch smoking his pipe. 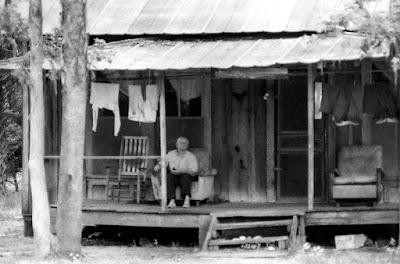 I can't remember if we spoke or if I just got out of my car and started taking pictures.  That, however, would be difficult to imagine.  God only knows, though.  Young boys are rash.


You can't help but wonder about his life.

I love the details now, the worn, dirty shirt, the clothes hanging on a wire in the humid air never to completely dry (though an iron will finish the job), the worn and torn chair he sits in and the rocking chair with the sweat stain where a back would rest.  This was the world that surrounded the university. 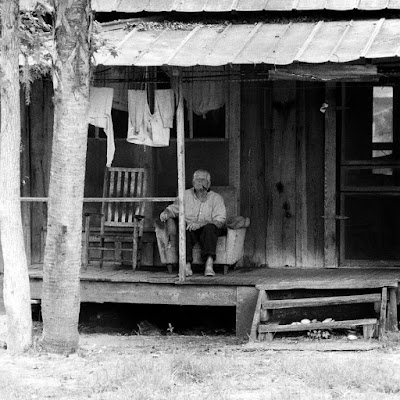 It is mid-afternoon on Sunday.  I woke at four-thirty and got up at five.  I made coffee, etc.  But I haven't left the house.  I haven't talked to anyone for days.  Something is wrong, of course.  For two days, I've been going through my photographs, sorting, scanning, discarding.  I've thrown away old prints and negatives I no longer care for.  I am drowning in photographs, negatives, images.  And books.  I've been throwing those away, too.  I feel I have to get out from under things, get organized, get. . . I don't know. . . lighter.

But I don't seem to be making progress.  This is going to take months.  I want to rent a storage unit and just shove it all in there.  I'll pay a couple years rent and give someone the key, and in a few years when I'm gone. . . .

It can all go in the trash.

I have to get out from under this mountain of past, however, to move into the future.

Of course, there is the other thing that is slowing me down.  Two other things.

Woke before five once again.  Stayed in bed until that magic hour, though.  I went to my mother's house for dinner last night.  She's worried about me, wants to take care of me, and she also wants some company.  I turned her television off "Branded" and onto the news, but that was useless, for all stations went on endlessly about Kobe Bryant.  What a great man said an seemingly endless stream of NBA players and broadcasters.

"He was a rapist," I said.  "He paid a woman a kajillion dollars to drop the case."

I'm glad I didn't write that.  Here's what happened to a reporter who did.

•Felicia Sonmez is a national political reporter for The Washington Post

•She was suspended by the newspaper on Sunday after controversial tweet

•Sonmez replied that 10,000 people sent her 'abuse and death threats'

•In 2003, a 19-year-old woman alleged that Bryant raped her in Colorado hotel

•The charges were dropped and the two sides settled a civil lawsuit
Again. . . why am I so cynical?  I have to stop it.  It has cost me too much, I'm certain.

I think I'll put up another post after this one, a happier one that will make people feel good.  Yup.  That's what I'll do.
Posted by cafe selavy at 6:46 AM