Some Kind of Mania 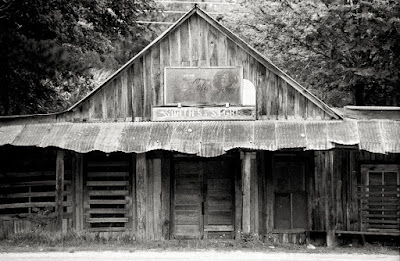 You'll have to look closely at this one to see that it was Smith's Store with a cool Coca Cola sign above.  What a world we've lost.

But I'm feeling like things might get better.  I did what I intended to do today, all of it.  First, I got up at five.  I can't help it.  I even took a sleeping pill when I went to bed, but bad thoughts drive me up, out of the darkness and into the arms of comforting coffee and the little Xenon light of the computer screen.  Later, when the sun came up, I did a little more straightening up before I got dressed and headed for the gym.  When I came home, I drank some Emergen-C and collagen water, took Resveratrol and herbs and enzymes and turmeric (that isn't an herb, right?), and called AARP to get my supplemental insurance set up, all the while scanning old negatives (efficient).  Showered and dressed and made a salmon salad that I ate on the deck with a glass of wine.  THEN, I did the harder thing.  I went to Charles Schwab to set up an account for my retirement payout which is a good chunk of change.  I wore my hippie jeans worn through on each thigh and at the corners of my back pockets where my bare ass might be seen, flip flops, and a wrinkled seersucker linen shirt.  Fuck yea, baby, I looked like Hollywood, hip, confident, and full o' money.

O.K.  I'm way overstating it, but you see, I've never had any money in my life.  I've always been two months away from the poorhouse, and though I've been making a decent living these past years, I've spent it like a drunken sailor, as the cliche goes, or, perhaps, like a drunken hippie who never felt he had enough money to save.  I should have.  Saved money, that is.  But who thinks they will ever get old?

The receptionist smiled at me when I walked into the lobby like she knew I was Hollywood, like she knew I hung out with Brad Pitt and had a mansion in Malibu.  Or, maybe. . . just maybe. . . the way they paid her to smile at people coming through the door.  But people who look like me don't just come in off the street, not into this fancy brass and glass place with its hugely high ceilings and marble floors.

When I told her I needed to see a broker, she smiled and said, well, technically we don't have brokers.  They are consultants, she said, smiling.

In about five minutes, a woman who was not a broker came out, smiled that same dental smile, shook my hand, and took me into her office like I was money.  And when we were seated and she had asked me, "How can I help you," I explained to her my situation which was that I didn't know shit about money but was getting some, and I needed someone to help me.  I handed her some paperwork that explained things.

She took out a pen and a notebook and started asking me questions to which I didn't know the answers.  "I'm an economic feeb," I said.  "F-E-E-B, as in feeble.  Maybe its feab, I don't really know."

"That's o.k.  We'll figure this out.  Now how much money do you think you will need a month to get by?"

"I don't know.  I mean I can drink cheaper wines.  I guess I'll have to.  And maybe Chevis Regal instead of good scotch.  I can cut out some of my subscriptions, try to cut back.  I don't know."

We went through all my various accounts about which I knew little.

"How much debt do you have?"

"Jesus, you know more about me in a few minutes than any girl I have ever dated has."

We went through my pension and social security earnings, then she started to explain the different investment options.  I stopped her.

"We don't need to go through everything today," she said, and then she set up an account for me and said I could call her when I wanted to talk again.

For free.  No fees.  You see, she was not a broker.  She was a consultant.

I learned more about finances today than I have learned in a lifetime.

As she walked me out of her office, she told me to come back anytime.

"Oh," I said, "I'll be here every day drinking the free coffee and hanging around the lobby.  That's what retired people do, right?"

I imagined her watching my bare ass as I sauntered through the door and into what had suddenly become a perfectly beautiful day.

Later.  I cooked a fabulously skanky dinner and ate it with relish.  I called my mother to tell her so.  And then, . . what?  For some reason, I can no longer watch television.  I wrote some messages with friends and then read.  I've been reading much lately.  I re-re-read Hemingway's short stories.  Tonight I re-read Jim Harrison's "The Man Who Gave Up His Name."  It is fairly fabulous.  And then I put on some music, too drunk to do much else.  And for the first time in months, I began to dance.  I dance silly, a combination of Laura Petri from "The Dick Van Dyke Show," and women in dance shows from the 1950s, those tight little semi-erotic without being obvious moves.  But I can't dance like I used to before the accident, and maybe I haven't danced since, maybe only once, and Ili always loved watching me move that way, or so she said, and suddenly, I just began to cry.  Not little sobs, but giant, convulsive weeping.  It only lasted a short while, and then I read some more.  But around nine, a time I might often go to bed, I was restless and decided to take a walk.  There is not much happening on a Monday night.  There is quiet and a little bit of light coming from the houses.  My neighbor was watching television.  Around the corner, a woman sat hunched at her dining room table.  The lake was quiet as were the streets.  I kept walking.  I saw the CEO of everything edible walking through his Italian-style house, his shirt neatly tucked into his belted jeans, and I wondered if he might sleep that way as well.  Further, I turned up a street away from the lake and walked by the house where my friends, the twin,' live.  They were sitting at the dining room table.  They alway eat late, and the one who does the cooking is a bit of a gourmand.  I could smell their meal from the sidewalk.   Then I turned homeward thinking that something was changing in me, that I wanted to be out, not anywhere especially, but out looking in.  I thought of throwing a sleeping bag and a cooler into the Xterra and going someplace, of sleeping in the car, of making coffee in the morning on a one burner stove and washing with the water that I carried with me, of writing in the morning, of walking and looking at something new.

Now I am back in the house, but I am not sleepy, not ready for bed.  I think I am ready for something.

I did not go to bed until after midnight, and I slept terribly.  Still, I woke at six.  I feel like shit.  Whatever mania gripped me last night is gone.

Today is my father's birthday.  He would have been one hundred.
Posted by cafe selavy at 7:17 AM