As F'ed As You 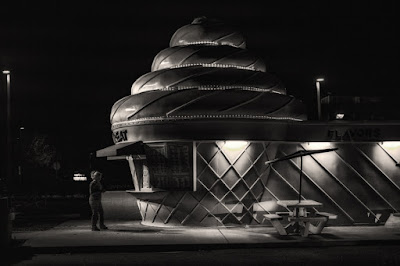 I did another batch of bookshelves again yesterday.  More sneezing and blowing and eye rubbing.  It hasn't gone away.  I sneezed during the night, my throat scratchy from dust.  This morning, I can feel my lips and nose are swollen.  Still, I have a final bout of shelf-diving today.  And that should do it.

So around five yesterday afternoon, I had had enough.  I needed alcohol to clear my throat, I said.  And so I headed up to the fancy bar in my dusty t-shirt and jeans with holes in the butt that show my ass.  You may not think it is sexy to see an old man's ass, but I think you would be wrong--and that's what makes a horserace.

When I walked in, one of the hipster bartenders was cleaning the bar, so I strolled up and said thanks and then something witty that made both bartenders and the waitress laugh.  I wish I could remember how witty I was and give proof, but you will just have to trust me on this one.

Now you must remember that I do not go to work anymore and that I am a solitary person and that I do not talk to anyone for days on end.  Except my mother.  I always talk to dear old mom.  But I don't get to show off so much there.  So when I get to talk, as I did yesterday with the bartenders, I often go into showtime mode.  Here's a little reveal--I had a talking job, a job that required performance every day.  I had a persona that I used for that, and I can go into that mode outside of the factory when the mood strikes me.  I guess the mood struck me yesterday.

The second hipster bartender, the one I'd never seen before, was a cute ginger with a beard and a modified man bun.  He was young and had a great smile.  You wouldn't imagine the fellow could have a problem in his life.

"What will you have?"

"I want a standard Margarita," I said.  "I need to get the dust out of my nose.  I've been clearing out bookshelves all day.  One day they will declare books a health hazard.  I'm pitching them by the bushel barrel."

"Dude, all I have are novels."  I told him what I did for a living for forty-four years.  It sounds impressive, I think.  "Too bad," I said.  "I was going to bring them up and fill your car trunk."

"I read a lot of self-help books."

"They won't help," I told him.  His eyes popped a little and he looked perplexed.  "You'll feel better knowing that other people are as fucked up as you are, but they won't fix the problem.  That's why I read novels.  Some people say that are depressing, but it makes me happy to know that there are people who suffer from the same things I do.  The ending usually turn out bad in many ways, but, well, you know, that's how it goes, isn't it."

He was smiling at that.  Why in the fuck did this guy need self-help books, anyway.

"Why do they call them 'self-help.'  You wouldn't need them if you could help yourself.  You should take the novels.  The girls will think you're super cool.  They will point to a book and ask, 'Have you read this?' and you can say, 'Not yet, but it is next on my list.'  They will like that.  If they see a bunch of self-help books lying around, they are going to run away if they have any sense."

You never know by looking how fucked up people's lives are.  I am somebody who thinks everyone is doing better than I.  I am too confessional for my own good, I've been told.  Other people just have trouble telling it.  My ex-wife said that.  She told me that I give other people ammunition to attack me.

Ah, well.  The Margarita was good, but I wasn't going to have two of them at that price, so I said adios and showed my old, groovy ass leaving the bar.

But, as they say, that may be too much information.

Today, I will finish the bookshelves and move on to the next thing.  I went to Powell's Used Books online to try to sell my stuff.  C.C. told me that they would give me money and pay shipping.  So I started punching in ISBN numbers for a bunch of books which was a really irritating thing to do, then hit the return.  In seconds, Powell's told me that they would give me $4.00 for the few books they agreed to take.  Fuck that.  I've talked to people who have taken their books to the used book stores around town, and it has been much the same.  They pick through your stuff and reject most of it.  Even the libraries don't want most of them for their fund raising sales.  Someone suggested taking them to Goodwill instead of throwing them away, and that seems like the best idea.  That is what I am going to do.

Oh. . . I almost forgot my promise in the first paragraph.  If I know it is boring, why would I tell you about my night's sleep(lessness)?   You see, it is like a depressing novel or a self-help book.  I tell it just so you feel comforted in knowing that there is somebody out there just as fucked as you.