The Old Road to Nowhere 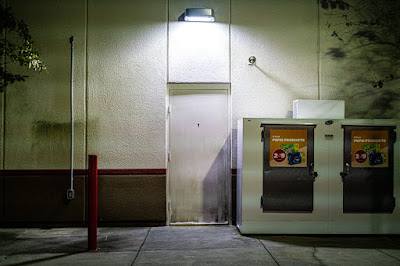 Yesterday was a repeat of the day before only less stimulating.  I did the same things, sorted books, made new piles, and still I did not finish.  It is taking me much longer to get going.  Before I do something, I think about it first.  For a long time, it seems.  Walking across a room seems to take ten minutes.  I think it is the result of spending so much time alone.

Gym, lunch, bookshelves.  Dust, sneeze and blow.  I did find that my local library would take all my books as donations for their sale store, though, so I took bushel baskets full to them.  I told them I'd be back with more.

I still have shelves and piles to sort today.  In the end, though, everything will look to be the same.  I don't understand it.  I really don't.

Toward five, as the cocktail flag went up, I decided to return to the bar for another margarita.  Maybe a mistake.  Nothing interesting happened.  I drank my drink, paid too much, and left.

Somewhere in a pile, I found my high school yearbooks.  What the hell would I do with these, I wondered?   I opened them up and looked inside.  I was trapped.  I kept looking at those images, page after page.  Everyone looked so happy, fun, and young.  I don't remember high school being like that.  And the dopiest of people all looked like young movie stars.  According to the inscriptions kids left in my yearbook, I was already a radical, a lovable one in some ways (they said "stay sweet").  Even the teachers who wrote in my book said so.  I did not join any of the social clubs.  I led walkouts of student government elections.  But when I looked at the yearbook photos, holy shit. . . did I miss out on all that?

I couldn't remember the kids who signed my yearbook.  Mary who?  I didn't recognize the class photos for the most part.

I cooked a dinner for one and ate it while watching the news.  The house was still a mess of books stacked inconveniently in piles around the floor.  It was just turning dark, and I already had had too much to drink.  The phone wasn't ringing.  The texts weren't pinging.  It was just me in a littered room with the whiskey and darkness ahead.

I grabbed a camera and headed out the door.  A VFW post was my ostensible destination.  I drove slowly looking around for possible pictures.  I needed to be careful, though.  I didn't want to mess with the po-po.  Slowly further, onward, seeing things I would photograph on the way back.  First the farthest outpost.  The way home was easier.

I shot the VFW.  It wasn't interesting.  The pictures looked like shit.  But my blood was pumping as I pulled into the parking lot and backed into a space by the exit.  I got out and started setting up my tripod.  Jesus.  There were probably a bunch of junkie bikers in there that fought in Iraq.  I left the motor running so that I could make a quick getaway if I needed to.  I kept imagining voices yelling, "Hey. . . what the fuck are you doing?  This is private property you fucking asshole."

I took a lot of pictures trying to find the good angle that I never found.  I was glad to pull out of the lot.

Onward.  There were worse places than this.  Two years ago, this would have felt different.  I could run.  I could take a punch.  I could maybe even fight.  Now. . . .

Further.  Now the roads were broken, the businesses dirtier, the lights dimmer.  There were cement and girder factories and greasy tire and mechanic shops.  I pulled into empty parking lots, left the engine running, wandered.  Was I stupid?  I left the engine running, the doors unlocked.  I pictured some degenerate slipping in behind the wheel and driving off.

Each parking lot I stopped in, I backed in near the exit, ready to bolt.

Outside some kind of shop with colored lights, standing in a dirt parking lot, I was jolted by a crashing sound just behind me.  I turned around.  A pickup truck was sitting in the road blocking my car.  Another car took off in the opposite direction.  It sounded like one of them had hit the other, but the truck was just sitting still.  Maybe his transmission fell out.  Maybe it had something to do with me.  I stood staring into the darkened front windshield to the truck trying to look. . . I don't know. . . not scared?  Then suddenly, the pickup jerked around and went speeding after the other car.

I'd be better off sober, I thought.

I turned around and headed for home, each mile a little brighter, the buildings newer, bigger, more recognizable.

Less interesting.  Those photos I thought of taking on the way out didn't interest me on the way back in.

I don't think many of the photos will be any good.  Most of them will be nervous little things, too hurried.  One or two, maybe, if I'm lucky.  I need to get my feet more firmly under me.  I need to feel more certainty.  I need to feel that two hours on a road to nowhere is better than another evening on the couch at home.

I'm still transitioning.  Don't worry.  I'll figure it out.
Posted by cafe selavy at 8:59 AM