Be Good. Be Constructive. Be Optimistic. 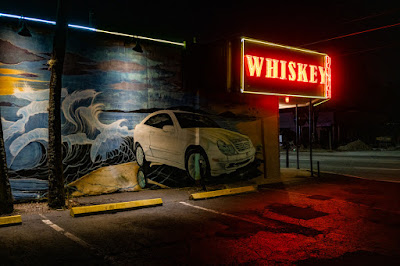 You could have predicted that my day would not go as planned.  I did go to the gym early, and I did go to the beautician, but I don't think I got beautified.  It happens.  Once in awhile, the treatments are not what you expect.  My beautician has been going through a bunch of custody court appearances and is, shall I say, distracted.  That is all we talked about as she butchered my hair.  I look like a cross between Mo of the Three Stooges and Captain Kangaroo.

Well, it is better than the coronavirus.

I picked up my film from the photo store.  Nothing worth scanning on the roll.  There is always high expectation and usually sad disappointment.  Sometimes, however, the images age well, and going back later, you find surprises you overlooked.  I will let them marinate.

I got delayed at the photo store.  Two of the fellows there have opened up a photo gallery and wanted to walk me over to see it.  It is impressive for what they can afford.  They are nice to me and I ended up staying too long.  When I got home, I was late for the party in Grit City, and at that time of day with bad traffic, it was almost an hour's drive.  I poured a drink and texted that I wouldn't be able to make it.  But I was sad.  It was going to be just another hermetic night alone.  A couple people texted back their disappointment, and I felt guilty.  I asked if it was a large group, then decided I had nothing else to do, so I put on a jacket and some shoes, got into the car, and headed off down the highway.

Just as I was passing my usual grocery store, I got a text from a buddy who said there weren't many people there and I wasn't missing anything.  I pulled into the parking lot and went in to buy myself some dinner fixin's instead.

The photographs of the countryside would have to wait for another time.

Now, the endlessness of another finite day spreads before me.  I have no plans.  Random acts and habits against the void.

The day, however, is spectacular, forty-eight degrees and crystalline.  I hope I do not find it oppressive.

You see?  I write about hope.

I spent the morning copying and pasting news headlines to friends.  In a certain juxtaposition, they are hilarious.  In another, they are terrifying.  Either way, they are a revelation of the working zeitgeist of the day.  A woman took 500 hits of acid by mistake and was cured of the neuropathy caused by Lyme's disease.  A fifteen year old took ten hits and was cured of her mental illness.  There is controversy in France as Roman Polanski's new film about the Dreyfus Affair is nominated for twelve "French Oscars."  Female's are becoming mohels and performing the sacred rites of circumcision.  Elizabeth Moss stars in another #MeToo role.  A woman in my own neighborhood zipped her boyfriend in a suitcase for hours until he died.

I'm asking my friends to read these.

I didn't sleep well and then slept too late and the day is getting away from me, so I will venture forth and see what tales I can capture.  Be good.  Be constructive.  Be optimistic.
Posted by cafe selavy at 9:27 AM