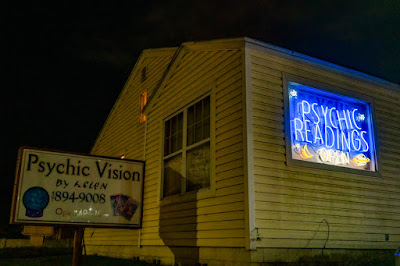 I'm sitting on the deck in the late afternoon gloom drinking a cocktail and waiting to go to my mother's house for dinner.  My suggestion.  My cousin has gone to the coast to see another relative for a while, so my mother hasn't any company.  Now that I spend my days and nights alone, I know how glum she might get.  I will go over and break up the monotony.

People seem to like the new night photos.  Maybe I can turn them into a series, though as soon as I do, they will become controversial, too.  Naked people, then street people, then buildings.  One shouldn't be allowed, you know.  It is a violation.  Probably the least of the violations, now that I am thinking of it, were the naked people.  They were all enthusiastically willing.  Think of that, if you will.

Not one of these buildings nor their owners has consented.  I am simply following Google Maps' lead.  I've thought about that.  Have you ever searched your address and saw Google's street view of your home?  What if. . . just what if. . .your husband or wife or girlfriend or boyfriend was out of town when they took the picture and you had another boy or girl's car in the driveway?  That would be the picture for years to come.  I wonder how many couples have ended up in divorce that way.

The camera I am using for the night pictures is a Sony.  If you want to take pictures at night, I'd highly recommend one.  Aesthetically, the cameras are pigs.  I don't enjoy holding mine.  But the guts in them are amazing.  I love to hold my Leica, but this Sony really, really works.  The prices are not bad for the performance, and you can use just about any lens ever made on them with a cheap adaptor.  The native Sony lenses are well-priced, too.  I'm using an older model.  The new a7 rIV is the real rocker.  Even the names of the cameras, though, are clumsy.

I hope Sony gets the pitch and sends me one of the new editions.

I was driven inside by mosquitoes last night as I was writing that.  We are not supposed to be plagued by mosquitoes in the winter, but there has been little winter here.  By and large, it has been warm and damp.

This morning, I deleted the last paragraph I wrote yesterday afternoon.  It was about emotional longing.  About romance.  What I should have written about is laughter.  Ili and I laughed all the time when we weren't arguing.  At the factory, my office was always full of laughter.  I haven't had a laugh in two months.  That can't be good.  It is hard to act goofy alone.  I barely use my voice.  My face, I'm sure, is a mask of stoic resolution and determination.  My ex-secretary wrote to tell me that things just weren't as much fun at work any more.  I didn't tell her what it was like here.

I dropped off more books at the library yesterday, and decided to take a look around.  I used to love libraries, but yesterday the library seemed sad.  The books on the shelves were worn and looked to contain the norovirus.  In memory, librarians were always a little pale and seemed to be fighting a cold.  I'm sure that libraries are incubators of disease.  I looked around at the people there and was sure of it.

The world is a contagious place, so maybe I am better off living in my new isolation/quarantine.  I was scheduled to go to China, Thailand, and Japan this summer, but they are talking about cancelling the summer olympics because of the corona virus, so I think that might be out.  Have a strong desire to drive around the U.S, this spring and summer anyway.  The U.S. is a beautiful place, and there are some odd places and weird festivals I'd like to see.  That is, if I have any money left after "investing" my retirement funds.  My timing could not have been worse.

I wrote another paragraph that I deleted just now.  The temptation to write about the thing is great, but the outcome is not, and so I'll end the rambling for now.  Maybe I'll go to the psychic and see what the cards have to say.