Something Has to Happen 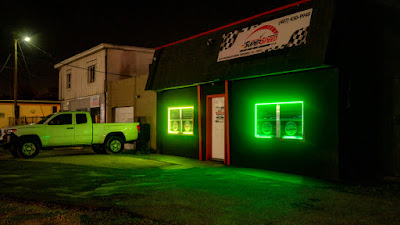 I've warned you.  Whatever I do, do the opposite.  How long did it take the market to crash after I put my retirement in it?  One day?  Sure, I went conservative, but I've already lost thousands of dollars today and it is barely mid-afternoon.  I said I wouldn't look, but I had to.  I thought I was supposed to make money.  So much for that.

I'm fairly lost.  When I was working and in a relationship, my mind was filled with all the projects I'd be doing if I didn't have those obligations.  I was going to be a real genius, I was.  Now I can't remember any of them.  I am tired all the time.  All I want to do is sleep.

Today I left the house with cameras.  I had to get out.  I drove around slowly, looking.  I didn't see anything fruitful or promising.  I wonder how people stand it, then I think of all the methheads and opioid addicts, and I go, "Oh, yea."  It won't be long, I assume.

I'm entering the last week of the first month of my retirement.  I like the night picture project.  There is one thing.  I need to find another.  I want a studio again more than anything.  I want a big place where I can make photographs, do encaustic work, put a big printing press, a vacuum exposure unit, and a big ass computer station.  And a couch and some chairs where I can entertain.

It is just another fantastical illusion, of course.  Not having the studio stands in the way of my genius just like a job and a relationship did.  But I really did work when I had one before.  I made some handsome stuff, I think.

With what I'm losing in the market, though, I might have been wiser putting my money into a studio.

There is a workshop in Santa Fe that I want to attend.  It is one I've attended before, but some things have changed a bit.  Back when I was working, I got funded to go to these things.  Now. . . I'm on my own dime.  The workshop is five days and about $1,500.  Plus airfare.  Plus accommodations.  The work I did when I was there last is prominently displayed on the workshop's webpage.  They kind of dug it, I guess.

If I'd made that much money rather than having lost it, I could better justify going.

Now I've dicked away the day with nothing to show.  I can't go on this way.  Something has to happen.

I found the Elks Club last night.  Nothing.  It wasn't much of a picture at all.  At night, lighting is everything.  I took pictures of some other places that were interesting, but again, the lighting was not dramatic.  But I tried.

And there is that.
Posted by cafe selavy at 7:44 AM