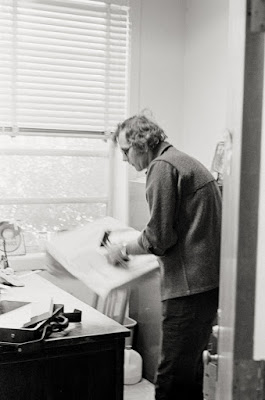 I muddled through the day somehow.  Nothing new.  Went to the gym in the morning after thinking I wouldn't, then started culling books from the bookshelves to make room for the books I have brought home from work.  Difficult and dusty work.  I made it through the "Cs" so far, but I don't think I am culling as much as I should.  Mostly I am getting rid of stuff that seemed important but that I never read like Harold Brodkey, and things that seemed hip at the time that I never got around to reading and have no clue about now.  Then there are the silly books I read like the Jimmy Buffet novels.  And things I read because it seemed I should like Russell Banks who everyone said was good but who means nothing now.  I couldn't part with the Bruce Chatwin books though they mean nothing to anyone now and I had to keep every book by Paul Bowles.  I worked all morning, but I've barely made a dent.

I find all sorts of things in old books, too, notes and letters and cards and invitations--anything I could use for a bookmark--and so I flip through them all.  I didn't touch the shelf and a half of Bukowski.  But like I said, I have a long way to go.

Went to a barbecue party at my replacement's house and sat with a mixed group of his friends and some of the factory workers.  I was o.k. but lethargic.  I drank some and ate too much barbecue and came home three hours later to two cats waiting by my door, my feral and the neighbor's domestic.  They fight now to see who gets to look in.  I put some food in the bowl and then laid some out on a stone step for the domestic, but the feral cat had to push him away and have that, too.  They are my closest friends right now, I guess.

I will have to get a new yardman soon.  The leaves are overtaking everything.

It is just turning dusk, and I am tired.  I want to curl up and fall asleep, but that would not be good later.  I thought an expensive whiskey would wake me up, but it has had the opposite effect.  I will have to switch to the cheaper scotch, I guess.

The photograph is of my college photo professor, Jerry Uelsmann.  I don't know what made me snap the photo nor why I was brave enough to do so.  Uelsmann was at that time coming off an NEA Fellowship that was following a Guggenheim award.  His photographs sold for more than anyone's in the world.  After the advent of Photoshop, he said, he felt like he was teaching horseshoes.  But he was a wonderful teacher who never promoted his own techniques and spoke only of the aesthetics that photography could promote in the world.  I think I still have one of the work prints he gave me in a class demo many years ago.  I saw him lecture at Country Club College a few years ago, and he was still a vital and funny guy.

I must figure out what to do with my evening.  I would rather read than watch t.v., but I don't know how far I can make it.  I ate so much at the party that I don't really want to make much dinner.  Some ramen noodle soup would be nice.  Not the college kind.

"What are you going to do in retirement?"

Have you heard about Kobe Bryant?  I think they might cancel the Super Bowl.  They will, at a minimum, play it in sadness as a tribute.  Who will win?  It doesn't matter.  It is not a sporting event, it is a spectacle.  There will be too many commercial breaks and too long a halftime show for either team to get into a real rhythm.  They should call it "Football Interrupted."  It is not a real game which is a shame.  I would like to watch these two teams play one another under normal circumstances.  It is an interesting matchup as they say on Sports Center.

Trump gave him the moniker, "Little Marco."  Now Little Marco Rubio is defending the president against impeachment and telling everyone that he is sorry for the comment he made on national t.v. about Trump's teeny weeny pecker.  Trump has shown him its true size, and Marco is a believer.  If you haven't seen Rubio's rationale for voting against witnesses, you should look it up.  He is one of the people making our country great again.

Look at that.  Hardly a mention of how terribly sad I am.  Soon you'll think I'm all better.
Posted by cafe selavy at 6:22 AM