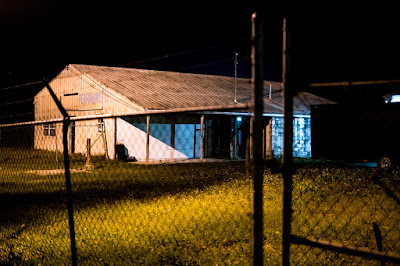 I just got up.  It is four p.m.  No, I didn't just get up.  I was shocked into consciousness up by a visitor.  I was in bed, dead asleep.  I woke to hear a voice yelling my name.  WTF?  I was in the middle of a sangria nap.  She was already in the living room by the time I rose.

I am at the hipster place with a cappuccino now trying to get normal.

Lunch was great.  Ceviche, garbanzo bean soup with an egg on top, and sangria.  I'm not eating sushi during the flu season, but I thought I could chance ceviche.  Lime. . . you know. 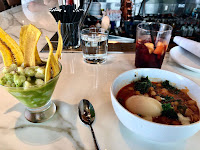 But I wasn't feeling so well to start.  I woke up too early and never got my balance.  Literally.  I was dizzy all morning and my back was killing me.  The back is from doing my first squats since my accident.  And my last.  Done with that.  I had forgotten about back pain.  It is debilitating.

So I went to the gym.  Duh, right?  But it was my new gym, and I thought maybe I could work my way out of the dizziness.  That is how one thinks.

The new gym is a wonderland, big and full of workout things.  It makes me wish I were whole again. I would tear it up.  But I have been working out with the housewives of the YMCA, and there are not so many mirrors as there are in the new place.  Everywhere I look there, I see the shrunken version of myself.  There is a sadness in it.  And of course, who should I see when I walked in?  That's right--my mortal enemy, the Comedian, the one I inspired to get on the 'roids.  We looked at one another in shock and disgust.  He is bigger than I am now.  Fuck.  I always knew that my butch shit was going to cost me when I got old.  He will hit me one day, I am sure, just to make up for the years of shame.

I probably deserve it.

Q said I must make sure to get the fight on video.  He says it will be valuable.  I'm sure to make more money from this than I received from getting run over.

So, I worked out hard in preparation.  When I left the building, I was walking like a corkscrew.  Barely.

After the gym and after lunch and after drinks, I was ready for a nap.  And deep in the middle of the thing. . . .

I will be miserable for the rest of the day and night.  I should drink hydrating fluids, of course, but I will be on the couch with a bottle of whiskey.

I should have taken photographs today.  It would have been lovely.  If not that, I should have done some work.  I should have gone through at least one box of books littering my house and made decisions about what to keep and what to ditch.  It would be easier just to toss a box in the garbage and forget about it.  I would never even realize what I threw away, I'm sure.

Now the coffee cup is cold and I feel like a drink.  I will head home now and sit on the deck and try to regroup.  There is nothing like a good caffeine/alcohol smackdown.

And of course, as always, I'll try not to be disappointed.

Jesus, I wrote that a long time ago, it seems.  I did come home and have a drink, and I did talk to my mother, and then I made a simple dinner.  And sometime after, I rushed to the grocery store for ice cream and cookies.  It was imperative.  But I ate only two cookies and no ice cream.  The entire thing was symbolic, I think, it being Saturday night.  I was drinking alone and wanted some pleasure.  So cookies and scotch and a whole bunch of YouTube.  I watched episode after episode of NPRs Tiny Desk concerts.  And then hours of Norm Macdonald. WTF?

I must have gone to bed.  I didn't wake until the sun was up this morning.  My back still hurts, of course.  It is on fire.  Perhaps today I will try water.  I hear that is a good thing.
Posted by cafe selavy at 7:57 AM