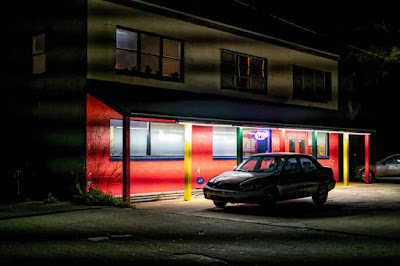 I met them at a taco place near the factory.  Only half of the coterie had shown, my ex and my replacement.  There they were--the new couple.  Well. . . shit happens.

I was the only one allowed to have a beer with lunch.  It felt good.  It made me sleepy.

When I got home, I took a nap.  I got up at four and had a glass of wine.  Hell, where had the day gone?

I decided to go to my mother's house since it was V-day.  I poured a big glass of whiskey for the drive.  I sat with her and my cousin until six, then went to Whole Foods to get something frozen for dinner.  With wine.  Then whiskey.

I fell asleep at the computer editing this picture of a smoke and vape shop on the outskirts of town.

I'm either going to have to get more sleep or quit drinking.

This morning, I woke at 4:30 in quite a vivid dream.  I won't tell you about it, for as I have said over and over, other people's dreams are either boring, irritating, or both.  But when Ili showed up in it, I woke with a start.  Apparently, even in sleep. . . .

I want to make intimate photographs of people again, not just photos in the street.  I don't want to do fashion.  Just intimate portraits.  Since I don't have a studio, I have to figure out how to do this.  I need a practice model, someone I don't have to please with pretty or successful pictures.  Just somebody who likes participating in the process.  I have a friend from the factory who I don't see any more but who showed up at my retirement thing.  She has three gorgeous daughters, and she might be willing to pimp them out to me, but they will want REAL pictures.  Of what?  That is the thing.  I need to know the answer to that.  My answer, not theirs.

I would have to be crazy to photograph her daughters.  God knows.  The one she brought to my party is a 5'11" slender tenth grader.

I'd better stick to outposts and landscapes and junkyards.