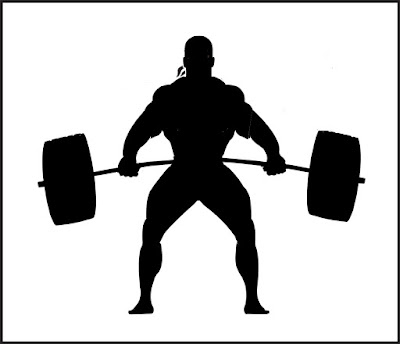 Not everyone at the gym was a champion of some kind.  In general, they was a coterie of lunatic misfits and badasses.  Training there was like being in prison or being part of a biker gang.  I used to kid that I was the only one there who didn't have a parole officer.  It was half true.  But there was a group of them a few years older than I who had gone to high school together, and these many years later, the residue of that still clung to them.

Lizard was a powerlifter, but he hadn't started out that way.  His real name was Richard, but he had a predilection for sticking his tongue out slightly and running it around the contours of his lips.  In high school he had bee a skinny cross country runner.  Apparently, he had been picked on, perhaps severely.  At least that is what I picked up from the stories that were told when he wasn't around. His attitude about "getting even" with a number of people fairly confirmed it.

Lizard was a couple years older than I and had begun working out at the gym before I became a member, so I only got this story secondhand.  But as the story goes, he had wanted to be a bodybuilder and as he got bigger, he decided to train for the local bodybuilding title.  Several of his "friends" in the gym were giving him advice on how to get ready for the big event.

"Milk," they said.  "That's the secret.  You just have to keep pounding the milk straight through until the contest."

Of course this was ludicrous, but that's what Lizard did, and of course he didn't get very cut by showtime.  When he went out on stage and ran through his poses, he looked like a big, chunky baby, they said.  I heard this in the locker room when Lizard wasn't around.  Ho, everybody laughed at that story over and over again.

Lizard's reaction?  He never stopped drinking milk.  Up until the day he left town (more on that later), he drank a gallon of milk a day.  He always had milk with him and would take big gulps from the plastic gallon container.

And he got stronger.  As a power lifter, his specialty was the deadlift.  There is probably no competition you could watch that is duller than watching someone pick up a big bar of weights until they stood upright, but in the state, there was nobody better at it than Lizard.  Nationally, he was one of the top fifty lifters in the country.

Of course, steroids helped.  Lizard was an A number 1 abuser.  He used everything he could get his hands on.  For a while, he was shooting gorilla hormones and bull hormones.  I have no idea what these actually were, probably something that vets used, but I never found out.  Lizard was big, around 6'2" and 260 pounds, but the other guys still liked to fuck with him.  He was an easy target in many ways.  He had a peculiar personality.  He was like the Rain Man in much of his behavior.  He was very particular about certain things.  Before he would lift, he took all the plates he would use and lined them up on the deadlift platform.  Of course, there were a lot.  He had a specific bar, too, a favorite bar, that he had to use.  He was a pain in the ass that way, but usually nobody said anything.

Lizard wasn't a good looking guy.  Actually, he was worse than that.  The teeth in his small mouth were twisted and broken.  His jaws were perpetually clinched, his teeth grinding.  He wore cheap glasses that made his tiny eyes look huge, and his skin bore the signs of acne-laden teen years.

He lived at home with his parents until well in to his thirties so that he could do nothing but train and eat.  After he moved out, he needed a job, and he began working as a bouncer.  He, like many others in the gym, would tell tales of beating people half to death the night before.  Lizard was especially pleased if someone actually shit his pants as a result.  Bouncers and cops had an agreement at the big bars.  They were all friends.  The story always went the same way in the report.  The bouncer asked the customer to leave and the customer became belligerent and eventually got physical.  This was always witnessed by another bouncer in the club.  And so in self defense, the bouncer. . . would beat the man until he shit his pants.

Lizard had a history degree, and remarkably one day he announced that he had gotten a teaching position at a jr. high school.  It seemed ridiculous.  It seemed a joke.  Abruptly, Lizard had entered the middle class.  He bought a small house in a marginal part of town.  He went to work every day and trained after school.  His entire routine had shifted.  But he was happy.  He liked to terrify the boys.  Nobody acted up in his classes, he said.  He must have looked like a monster to those boys.

But the little girls, well, that was another thing.

He only managed to keep the job for a couple years.  It was bound to happen.  This was a perfect formula for disaster.

There was a little girl who lived in a trailer park who started flirting with him.  She did what little girls do, showed him her panties or whatever, and he just lost his mind.  She was fifteen, and her mother, he said, would drive her over to his house and drop her off.  Lizard was in love.

But, as little girls are wont to do, she told one of her girlfriends that she was fucking her teacher, and that little girl told one of the school counselors.  She reported this to the principal who got in touch with the feds which he was, by law, required to do.  And this started the investigation.

But Lizard always had a plan.  He was meticulous in his planning, as meticulous as he was with keeping notes in his tiny, perfect script.  You almost needed a magnifying glass to read his notebooks.  He had the handwriting of a serial killer.

So. . . one weekend, Lizard, the girl, and her mother drove to North Carolina where he got married.  The mother signed the papers.  Everything was legal.  It was unbelievable.  They couldn't prosecute him.

He lost his job, of course.  He never lived with his "wife," and I assume that after things were over the marriage was annulled or they got a divorce.  He never talked about that part.

But Lizard had bought a small house in a marginal part of town when he started teaching.  Now he needed an income.