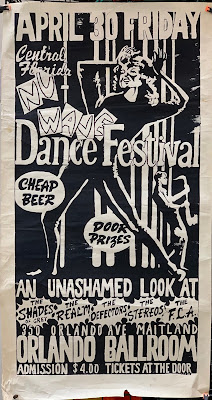 I am sitting at the Cafe Strange, eschewing the hipster coffee shop today.  It is crowded and the fellow next to me is sneezing, so this may be a mistake, but I have not felt well all day myself, my lips swollen in some allergic reaction.  The pollen is terrible here now, and it may be that, or I may be allergic to one of the cleaning products I was using yesterday.  But it could be some viral malady as my belly does not feel so good, either.

Bitch, bitch, bitch.  That is all I seem to do now in these trashy first drafts.  But I am drinking a very good IPA instead of coffee, so there is that.

Besides, I used to be something of a hipster, too.  Today's picture is a poster that the drummer from the old band sent me a couple days ago.  1983.  We were The Stereos soon to become The New Suburbans.  We started off more Elvis Costello and ended up more The Clash.  All in all, we were a dance band, I guess.  We had no grand aspirations.  We were playing for fun.  We started out in little bars and worked our way up to larger clubs.  In the end, we were playing stadiums and outdoor festivals with crowds from five to ten thousand people.  Most of our songs were "originals," as we said with a smirk, social and political protest songs with snappy lyrics and a driving beat.  In retrospect, I realize how much we all overplayed our instruments without nuance.  Our poor drummer is a cripple now from beating the drums so hard.  There was nothing dreamy about our music, nothing like the genres I listen to.  Songs like "Bad Jet" and "Neutron Bomb" were the alpha and zeta of our gigs.  Posters for our shows had only a picture of a jet or a bomb and the club dates.  We never needed to post the name of the band.

Now I sit among a room full of the disaffected people who would have come to hear us if they had even thought of being born.  Even old Ili was only three then.  Nobody here looks at me as a musical star.  I feel like Uncle Billy from "Love Actually (link) (link).  Still, it all works out.  In the movie, anyway. 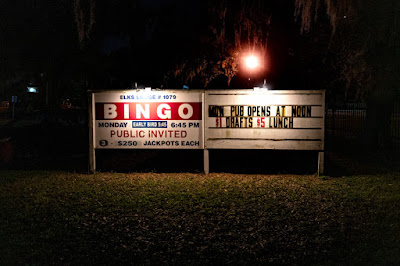 The new yardmen came today.  A crew.  I've never had a crew before, and now I feel like I belong to the neighborhood in which I live.  I went for a walk while they were there.  When I got back, they were gone.  I couldn't tell the difference.  Old Henry was greater by far.  But I'm a sentimental type, and I'm loyal to a fault.  Good old Henry, wherever you be.

I probably shouldn't bury this line in a post this way, should probably lead off with it, but what the fuck.  Hemingway is famous for telling young writers to "write one true sentence."  That has been a problematic statement for me a long while.  The problem, I guess, lies with the word "true."  What is a "true sentence"?  If I could just get one of those, I've thought, then I'd be on my way.  I have just reread Hemingway's short stories, though, and it became obvious to me what he meant.  If he'd said, "Write one factual sentence," then I would have gotten it.  That is what he does.  Like the young journalist he once was, he wrote factually.  That was his truth.  "Jim was tall and wide, and when he drank, it was usually whiskey."  Something like that.  The mountains were brown and yellow.  The sky was clear.  In other words, "truth."  It simplifies much in a world of messy moral values.  It may be good advice today.  One True Sentence.

Maybe this was a good thing to bury after all.

I'm leaving this bad cafe.  People are coughing and sneezing all around me.  What was I thinking?  The beer was good, but the music wasn't.  It's just that I needed distractions.  I have spent the last month of my life 95% alone.

All predictions indicate, though, that the next month will be much the same.  Covid-19 is seeking old men whether they played Dance Festivals or not.  Tall young women have no need to fear.  Old Bobby Dylan, however, better be making plans for staying at home.
Posted by cafe selavy at 8:21 AM