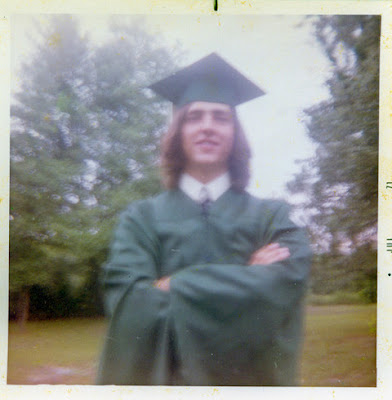 High school graduation, 1971.  I was not allowed to wear my hair that long, so I had to wear a short haired wig--the hair hat--to school.  But we were to be free of all that now.  It was delicious.  I would not cut my hair again for years.  I learned a lot about repressors and repression and the reactions they invoke.  This photo was taken with a cheap plastic camera my father had.  No exposure controls.  You just pointed it and pushed the trigger and hoped something came out.  Hardly anything did.  But that was my family, the way I grew up.  Non-technical and cheap.

I got a job working construction at Disney a few weeks later.  It was a union job.  They all were.  You had to be sponsored to get in.  My friend's father sponsored his son, my friend, and I.  We all went to work on the same site, the Contemporary Hotel.  My first day there, a crane let loose a bunch of I-beams that fell many floors and killed a carpenter.  We had to run over and pull the wreckage off him.  His eyes had popped out and there was blood coming from his ears.

They gave us the rest of the day off.

I was the only person with long hair working at the Contemporary.  Those rednecks weren't fond of me.  They put ups signs like, "On Friday, we kill the hippie."  Look at that little baby face.  I was a sweet boy.  People are cruel.

We worked seven days a week, ten hours a day.  Everything was behind schedule.  I had to get up at four in the morning to be there by six as I lived two counties away.  I got home at seven, ate dinner, and went to bed before dark.

It took another industrial accident to get me out of there.  Mine.  Again, it was an I-beam.  A bunch of us were told to move it.  We tried picking it up, but it was too heavy and everyone let go.  I didn't.  I crushed two fingers on my left hand.

That is when I decided to go to college.

I've been sitting in the house for three days now.  I have been thinking a lot about death.  At my age, I guess that is inevitable.  I don't like thinking about it.  It makes me very sad.  I know it will happen, and that there is nothing that can be done about it is maddening.  I do not feel well tonight, a bit worse than I have, and I wonder if this could be it.  I got very anxious and texted my traveller friend who came through Korea to see how he was feeling.  He said he was fine.  He has been in the states ten days now, so he probably won't get sick.  I am hoping whatever I have is a garden variety.  I am glad that my cousin is with my mother so that she has some company.  They have fun together.  I thought today that if fI were to have Covid-19, I would not have an opportunity to see my mother.  Not even if I died.  I am sure she has thought about that, too.

But if this is not corona, there is something else out there lurking.  I have outlived F. Scott by thirty-four years, Hemingway by seven, Faulkner by a few.  For me, isolated and quarantined, it feels like I live in the Middle Ages.  With plumbing and electricity, of course, but also with the specter of death now all around.  They knew death much more intimately than I do, of course.  People didn't live long.  I am most thoughtful tonight of all the images of death in art and literature from that time.  Of course they were superstitious.  It was all they had.

Well, I am not going to die tonight.  It will have to wait until tomorrow.  I am tired now and want to go to bed.  I hope to feel much better in the morning.

It is morning.  Almost.  I have read the newspapers, sort of.  I do not feel any worse.  Perhaps I feel better.  Some people are going to work this morning, I imagine.  Not as many, though.  Restaurants and bars are shutting down.  People are home with their children.  They will see what parenting is truly like now.  It is another positive thing to come out of this.

I had plans for retirement.  Those have all been cancelled.  Chances of meeting a girl, too, have come to a screening halt.  I won't be doing any travel photography.  But in cleaning up my old files, I find plenty to do.  Remember all those old Polaroid pictures?  I haven't processed 1/100th of them.  Maybe not 1/1,000th.  With nothing else to do, I might work with them again.  And digital files?  Oh, my.  I have plenty of creative work to do here.  I'm not just starting out.  I have troves.

I will stay in isolation until I know that I am healthy.  I am anxious to see how I feel as the day moves forward.  And since I've nowhere to go, you will be the first to know.