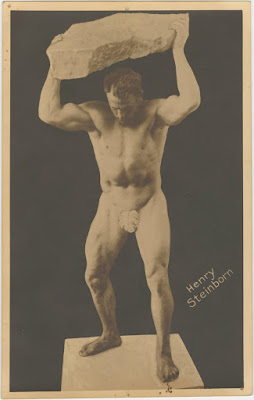 Even though visits to the site have dropped since I began writing gym stories, some of you have encouraged me to continue, so perhaps we should break out the milk and cookies and have another go.


The gym had been opened by the German Strong Man Milo Steinborn in 1952 and little had changed since.  By the time I joined in the 1970s, though, Milo had retired and only came in occasionally to check things out.  The gym still had posters of Milo and the walls sported his lifting records.  Most of the training equipment was what he had made.  There were giant rings that hung from the ceiling, some metal wall climb ladder, and other bits of paraphernalia that nobody used any longer.

The structure itself was a simple two story stand alone cement block building.  It had been divided in two, one half hosting a florist shop, the other half the gym.  Each had a big plate glass window in front.  Inside, the gym was open to the rafters like a giant warehouse.  High up near the ceiling were a few small windows for ventilation.  The walls were lined with big mirrors.  The floors were cement.  When I first joined, there was no air conditioning, so in the summer the mirrors fogged up and the walls would sweat.  The equipment was old, much of it made in machine shops around town.  The old dumbbells were welded.  Attached to one wall was a homemade pull down machine that could hazardous if you weren’t careful.  Next to it was a wobbly, homemade leg press machine that required you to lie with your back flat on the floor.   The gym was basic and functional with bars and weights and benches.  But some transformation was in the offing.

When Milo came in to visit, everyone fairly held their breath.  He was as close to royalty as you came in that world.  He was thick with thick knuckles and swollen knees.  His entire body was filled with arthritis, you could tell, but he was still strong and sure and not somebody to mess with.  His accomplishments were near mythical.  He was the first person to ever squat over 500 pounds.  They had no squat racks in those days, so he had to do what became known as an unassisted squat.  He had to stand the weight on its side, squat down and tip it onto his back, then perform the movement from the bottom position.  The idea now seems unimaginable, but this was back in the 1920’s after he had been released from the prison camp where he was interred in WWI.  He also owned some other strength records including the one handed clean and jerk.  He began wrestling to make money and eventually moved to America in the 1930s.  He was widely known as the strongest man in the world.  Even at his advanced age, he could outperform anyone in the gym. 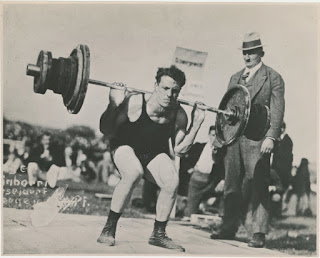 He’d come in, take a regal look around, and talk to the new owners in his heavy German accent, then he’d walk around and say hello to the fellows.  He judged them the way a farmer judges hog or cows, giving them encouragement or advice the way Mohamed Ali might talk to amateur fighters.  He was famous for denouncing training techniques he did not like and was reported to once have yelled, "Put some weight on that bar.  I'll not have any pump boys in my gym."

Nobody really relaxed when he came in.  It was always a relief when he was gone.  At least that is how I felt.  I never got along with coaches.  I was never their "type."  I was good at sports, but they hated me, really, and they would do anything to fuck with me.  I was the only hippie training at the gym, so I just wanted to go out the back door whenever he came.  I would never have been allowed to join the gym if Milo still owned it. 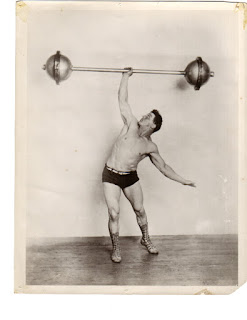 But he didn't.  It had been bought by a group of guys, the main owner being a fellow named Rocky.  Rocky was a tall, slim bodybuilder with a frame like Frank Zane, sloe-eyed with large lids that never quite opened entirely.  He had a large, French nose with the small chin that often accompanies it in the manner of Charles de Gaulle.  Rocky was, for all purposes, a Pump Boy.  When he came in to train, he always brought a cassette player, as the gym had no radio, no speakers at all.   When Rocky showed up, however, the place became a disco.  Rocky loved discos and wore the open shirts and gold chains that were the accoutrements of the day.  His hair was perfectly coiffed in that John Travolta style and he sported a neat mustache.  He always trained in cut sweatshirts or t-shirts,  meticulously styled to compliment his figure.  He was a friendly guy, but he always maintained an air of mystery.  He was the guy who got the steroids.  He was the guy who knew the Patrons.  He was someone who could hook you up with just about anything you needed.

The year I came, he won the Mr. Florida bodybuilding title.  Bodybuilding competitions, as is the case with all judged events, were highly suspicious, and we all knew that Rocky was connected before the event.  He was expected to win.  There was some dissatisfaction in certain circles that he had won the title, however.  He never competed again after that.  Rather, he became a promoter of numerous body building events, and often someone we knew would win.

Rocky began making some changes to the gym after the arrival of Pete Grymkowski who had recently won the Mr. World title.  Pete was a nefarious fellow.  It was reported that he had fled the Northeast to avoid being forced to testify against some mafia fellows he was reputably involved with.  Grymkowski was one of the biggest bodybuilders in the country, but he was on the outs with the likes of Joe Weider and Arthur Jones who controlled the most prestigious bodybuilding championships in the world.  When he showed up at the gym, he was broke and looking for a place to stay.  Rocky let him sleep on the roof of the gym.  That was the point at which everything began to change.