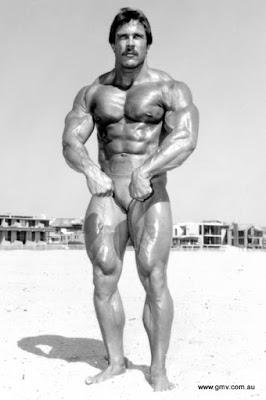 Pete Grymkowski was on the run, they said, from a subpoena in another state that would require him to testify against some old business partners who were "connected."  So he drove to Florida in his red corvette  shacked up there for awhile.

The guy was massive.  He was far and away the most muscular guy in the gym.  He was well known in the bodybuilding world having won most recently the IFBB Mr. World title.

When he entered the gym, he brought an entirely new ethos.

Pete used anabolic steroids the way other lifters ate protein.  The gym was known for its 'roid use, but people were usually shooting testosterone or deca-durabolin once a week and taking orals like dianabol or anavar in between.  Pete's steroid regimen, however, was shocking.  He used multiple injections a day.  He surpassed everyone else's weekly dosage in an afternoon.  When he took oral steroids, he never bothered to count them.  He just opened the bottle and shook out a mouthful.  He used every anabolic drug the gym had ever heard of and introduced a few others.  The gym had entered a new era--BP and AP.  And it didn't take long.

Pete didn't hang around much.  He'd come in and train and maybe go up to the roof where there were some lawn chairs to get some sun.  Pete had slept up there his first few nights in town, but he wasn't the first or last.  In back of the gym was a little courtyard surrounded by a high fence.  At the foot of a concrete slab was a fireman's ladder bolted to the wall that led to the rooftop.  The roof was a typical flat tar roof with pipes, tubing. . . nothing else.  People would go up to smoke dope and lie in the sun after a workout, or they would go up at night when they had no place to stay.  Many of the guys at the gym had lived in other fellows carports and garages for periods of time, sleeping in lawn chairs for weeks, so a night or two on the roof was just a bit like camping.

One day in February, the Phil Donahue show came to Sea World to tape a show on bodybuilding.  Phil's guests for the show were Arnold Schwarzenegger and Franco Columbu.  Arnold had won his fifth  Mr. Olympia title the year before and had since announced his retirement  from competition.  Now, it was generally supposed, it was his training partner's turn to win.

Pete had an idea.  He thought it would be smart if a bunch of fellows from the gym went to the taping.  He put together a big cohort of steroid boys to sit together in the audience so they couldn't be ignored.  I had to work, but I managed to get away in time to make it to the taping.  When I arrived just before the show began, the fellows from the gym were all seated in front of the stage.  I was able to find an empty seat a few rows back.

The show began with Arnold doing his usual promotional schtick.  He was promoting the movie "Pumping Iron" which had just been released.  After a commercial break, Phil brought out Franco who stripped down and went through some of his posing routine after which Arnold told some stories about Franco and the relationship between them.  Then they went to break.  Before the next segment began, there was some talking and pointing by people running around on stage, and when the next segment began, Phil Donahue announced that there were some bodybuilders in the crowd from a local gym.   He invited several of them to join him onstage.  A handful of them went up and Phil went through the drill, asked them their names and let them talk about what they did, etc.  One of them, though, made a mistake.  Malone was a cop who was training for an upcoming state competition.  Malone was enjoying his moment in the spotlight--for a moment.  But Arnold, grinning, asked him to take off his shirt for the audience run through some poses.  Malone, looking stunned, started to explain how the training cycle worked.  There was a bulking up phase, he said, and a cutting up phase.  Right now, he said, he was bulking up and hadn't started to cut.

"You mean you're fat," Arnold laughed as Malone unbuttoned his shirt with uncertainty.  But there was no turning back, and when he had stripped down, he stood before America, big and stupid and smooth as a baby's butt.  Everyone in the audience was giggling.  It was horrifying.

After that bit of comedy, Donahue announced that Pete Grymkowski who was the reigning Mr. World was in the audience, and Pete came out on stage.  Pete was as big as Arnold who was not training for competition and surely wasn't going to undress, so Pete took off his shirt and pumped a few times.  There was an obvious animosity between Arnold and Pete when Pete declared that he had been blocked from competing in the Olympia contest.  He said he couldn't get an invitation.  It got awkward for a moment and Phil turned to Arnold who said that he would make sure Pete was invited to compete this year.  He guaranteed it.  "You come and compete against the best bodybuilders in the world.  We'll see you there."

Pete didn't stay in Florida long.  He had all the equipment shipped down from his old gym up north so he could train, and when he moved to California, he left it all behind.  But that isn't all he left.  Things were getting weirder.
Posted by cafe selavy at 7:50 AM