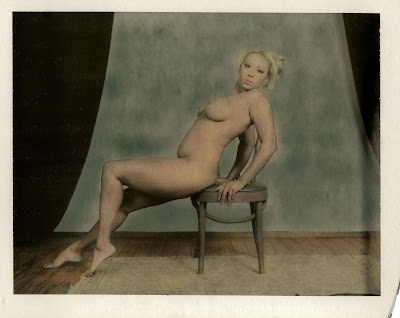 Man, I love this photograph.  But where can I post it?  Not FaceBook.  Not Instagram.  It is too awful, too horrible.  But she is confident, and she is beautiful.  It is a collaboration.  She came with her friend, not to model, but when I asked if she wanted to, she did.  I was fortunate.  I think I am talented, too.  Male gaze, right?  Am I fucking up?  This is an old Polaroid Chocolate film print hand painted in Photoshop, for those of you who wonder.  It takes time, but it is fun.  I am sloppy.  I don't try to be precise.  It is my way.

Once more, I will offer this print at a modest cost if you want to procure one.  But again, no wankers.  I am only offering this for aesthetic appreciation.

I watched Trump tonight, but he now disappoints me so.  He is no fun any longer.  I may have to quit watching his nightly telecast.  Wolf Blitzer will take the hit.

I can't quit looking at it.  The photo, I mean.  That woman is so utterly strong and awesome.  I wish I were as confident.

I saw my mother tonight.  I took her a box of Cheerios and a beer.  We sat out on a lovely night and talked until the beer was gone.  I will go back tomorrow and sit again the requisite distance from her plus some. We each think we have the Corona virus, yet neither of us wants to catch it.  We are practicing the strange logic.

Let me try to write a Gym Tale.

Charlie bought the gym from Van, and then Van went to jail.  He knew he would which is why he sold the gym.  But Charlie, not an astute business fellow, and really, not astute at all, was fucked.  The first thing he noticed was the electric bill.  It was much higher than it had been for Van.  That is because Van was an electrician.  He used to turn the meter upside down so it would run backwards.  He had all the metal clips, so he would turn it back around and seal it up as it was before.  Old Charlie, however, was finding what the electric costs should have been.

But that wasn't the only difference.  He wasn't making any steroid money, either.  Van was running an almost endless supply of drugs through the gym.  The gym was just a front.  His money came from pharmaceuticals.  Charlie, poor soul, was fucked.  He tried raising dues, but by now, there were other gyms in town.  He lost patrons.  Poor little Chubby Charlie.  There was nothing remarkable about him but his sadness, and eventually, bitterness.

Fortunately, Charlie's wife had a job at the phone company.  She supported the endeavor for awhile.  Charlie's favorite part of running the gym was going down the street to eat.  He loved to go to breakfast.  He loved going to lunch.  And he loved walking around the gym patting his belly offering up little belches of greasy fried potatoes and eggs, meat loaf, whatever.  Charlie seemed content to lose money as long as his wife supported him and he didn't have to work.  The gym went on despite Charlie.

But Charlie was too far upside down in the endeavor, and after a long, sad period, his dream crushed, he offered the gym for sale.

Lizard was the next taker.

Not much of a tale.  More like a transition.  But I don't have much go today.  I went to bed late and woke up late and am traveling in bubble gum and glue.  Jesus Christ, I need to get hold of myself. . . before they use the leeches.