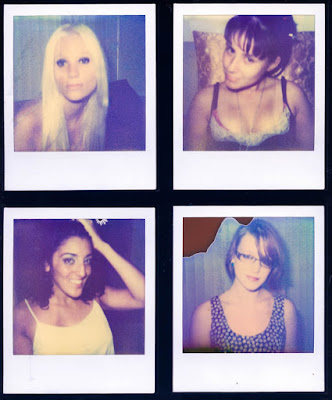 Here are some old instant film prints that were shot on the first iteration of Impossible instant color film.  It wasn't anywhere near the quality of Polaroid or Fuji films, but Impossible was  reinventing the process from scratch.  I used the film a bit back then.  And now. . . well, it might have a certain charm.  Everything you can't get anymore does.

I still don't feel well off and on.  I am not seeing anyone at all, so I doubt I am picking up new germs, but I wonder how something could linger this long.  I felt as if I had a fever yesterday, but when I took my temperature, it was way below normal.  I woke up with chills this morning.  I feel as if I have a cold.  I don't know.  We are living in new medical times.

Sick and alone.  If you are not single and living in a house by yourself, you haven't a clue what I am saying, try as you might to understand.  Nope.  You can't.  I have been alone for a long while now, not speaking except on phone calls to my mother, looking at inanimate objects other than at cat feeding times, cooking meals for one.  It is getting to be really, really weird.

Yesterday I sat at the computer most of the day scanning pictures and then coloring some of them.  I forgot to eat.  Suddenly, the day was gone.  It was dinner time.  Most of the time, I don't even know what day of the week it is.  I am often off by a day or two.  I missed putting the garbage out for the trash men this week.  This can't be healthy.

Let me start another gym tale.  I may not finish it, but I will begin.

Craig was another of the OGs of the gym.  He had gone to that same nearby high school that many of the guys there had.  Craig was one of the good bodybuilding competitors there, and he had won a lot of trophies.  He wasn't a dummy, either.  He had a Master's degree in Counseling and worked part time as a counselor at a junior college.  Now, I'm not saying that is a tough degree, but it was something.  There weren't a lot of guys in the gym who had gone to college, and most of those who had didn't finish.

Craig's father was a doctor, but Craig didn't get along with him at all.  Craig was a little crazy, and his father kept him tranquilized as much as he could.  Craig was married to a woman who managed apartments.  She was the bread winner, and they got their apartment for free, so Craig had plenty of time to work out.  But like I said, he was a little screwy.  He was into guns as most of the gym members were, and there was a dispute over who owed who money in a gun deal.  And one day, someone was dead.  They found him in his apartment sitting in a chair.  He'd been shot in the head.  There was a pistol on the floor beside him.  And there were rumors that went around.  Some said it wasn't suicide.

Craig got spookier and spookier.  One day, he wasn't around any more.  It was hardly noticeable.  At first he was coming into the gym but not working out.  He would come in for awhile and stand at the counter and talk.  Then his visits became less frequent until one day I realized that he hadn't been in for a long time.  He had just disappeared.  He was simply gone.

I never heard anything about him after that.
Posted by cafe selavy at 7:59 AM