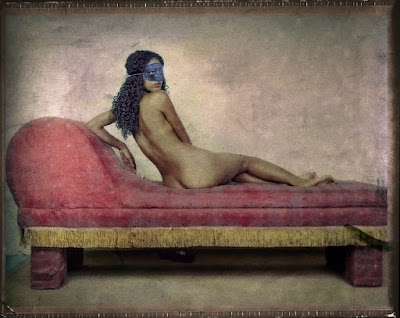 Yesterday, I worked on this old scan that I never cooked up just to see if I could still do it.  This was the shittiest Polaroid of the bunch, way overexposed, which is probably why I never processed it.  It took all my (considerable) skills to pull a print, and though it still has a little color cast to it that I need to figure out how to get rid of, I am pleased as punch, as Hubert Humphrey used to say.  Who?  1968.  Chicago riots at the Dem convention.  He was the residing V.P. who lost to Nixon. Dowdy little fellow who surprisingly said about fun, "What matters is how late you stay up."  Something like that.

Before face-touching became potentially lethal, my friend Dave had a lot of lovers. Now he makes do with nude selfies. He doesn’t even request them, he says. They appear as if by magic. “I wake up and they are just there.”

“I keep getting explicit photos from people I thought were just my friends,” says Matthew, an artist in Providence, R.I. He adds, “It’s nice to know they’re thinking of me.”

Since the pandemic began, sex has changed: It’s imagined, monogamous, Zoomed or Skyped. And nude selfies have become one symbol of resilience, a refusal to let social distancing render us sexless. Nude selfies are no longer foreplay, a whetting of a lover’s appetite, but the whole meal.

Though the debate about art versus pornography has never been settled, a case can be made that quarantine nude selfies are art. Some of us finally have time to make art, and this is the art we are making: carefully posed, cast in shadows, expertly filtered. These aren’t garish below-the-belt shots under fluorescent lighting, a half-used roll of toilet paper in the background. They are solicited or spontaneous. They are gifts to partners in separate quarantines, friends who aren’t exactly friends, unmet Hinge matches and exes. (Exes are popping up like Wack-a-Moles these days) (link).

I feel sort of left out, though. I have not been getting my share of these.  I guess people are just not "thinking of me."

The article is pro-nudity, and I would agree.  You want to do it while you're young, though.  It is o.k. to do it when you get old, but you will want the others.  All those youthful fears about your looks, you will find, were silliness.

Unless you had a mullet.  But details such as that were revelations about your intelligence, not really your looks.

I might feel better today.  I'm not sure yet.  I need to better manage my time if I want to be happy.  Thinking is not going to help me.  Focussed thinking will, but just sitting and ruminating is a terribly destructive waste of time.  Yesterday I kept myself busy.  I exercised and did yard work, then I spent time working on a project I might pursue.  Today I will look after my project for the Chinese factory. And, as I did yesterday, I will narcotize less.  Moderate narcotizing, but not in the extreme.

What I miss most is laughing.  Laughing alone would be madness.  Saying that reminds me of the time I was pooping in a public bathroom and I thought of something that had just happened that was funny, and I started to laugh.  It was absurd, and I couldn't stop.  I'm sure people taking a pee or washing their hands were wondering.  I mean, in one way, I was pleasuring myself, but as I say, laughing alone. . . .

It is Friday, I just realized.  The weekend is almost here.  What a relief it will be.  Weekends are so much fun.
Posted by cafe selavy at 8:22 AM