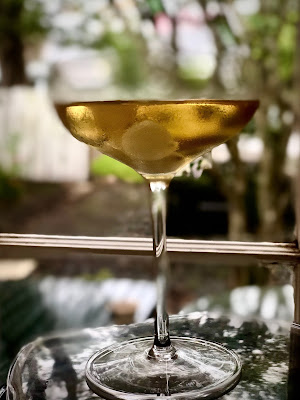 This is how I began my solo party yesterday, Friday, at 4:20 p.m.  I made my first best cocktail ever--a Perfect Gibson.  I have never had a Gibson before.  It is the same as a Perfect Martini, but with cocktail onions instead of olives.  I make Perfect Vodka Martinis, a more manly drink, I thought.  But Cary Grant orders a Gibson in "North by Northwest," and he's alright in my book.  On my last delivery from the liquor store, the Instacart shopper substituted cocktail onions for the bleu cheese olives I had ordered.  Fuck, I thought, but I was prepared for a martini, and by god, I would have it.  I didn't have olives, but I did have olive juice.

At the last minute, though, I decided to go for the Gibson.  I am not a fan of the dry martini.  It is just chilled vodka and olives.  For some reason, over the years, people have used less and less vermouth until, as one famous martini drinker once said, "just wave the vermouth bottle in the direction of the glass." It may have been Churchill; I can't remember.  But vermouth comes with its own pleasures, a floral bouquet of herb and spice infused alcohol.  Gin, too.  So, I pulled the recipe:

Easy.  I mixed the ingredients in a pitcher full of ice and stirred until things were frosty, then strained the liquid into my chilled coup glass.  Three cocktail onions.  And voila!  Look at that color.  It is the color of promise, the color of pleasure.

Again, let me say it--it was the best cocktail I have ever had.

I continued my party by sticking a frozen Amy's pizza in the oven and frying eggs to put on top.  And then, I did something unexpected.  Maybe it was the cocktail that did it, I don't know, but I decided to watch "Skyfall."  You know, 007 and all that.  It was a pretty movie, and I didn't have to pay much attention to it.  The payoff was that they killed off Angela Lazenberry or Maggie Smith or whomever was playing "M."  She was just insufferable.  And the villain was really, really good.  Villains, though, always steal the show.  Bad guys.  We love to hate them.

After the movie and after FaceTiming with Q who wanted to serenade me with his guitar because he fears I am depressed, I headed for bed.  I woke up at the usual time but went back to sleep. Twice.  I didn't get up until the morning was well underway.

And now it is Saturday.  Thank god it is the weekend.  Ha!

I just read this morning that Forbes says Kanye West is a billionaire.  All I can do is wonder what in the fuck is wrong with the world.  But then again, who am I to judge?
Posted by cafe selavy at 9:52 AM