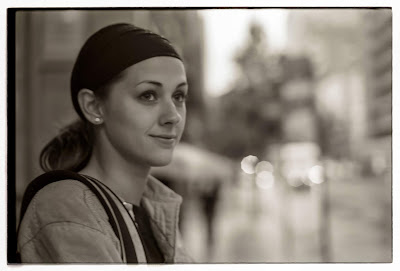 I wrote an entry last night that was very flattering to Q.  I was going to post it this morning, but it is gone.  The devil did not want me to post that, I am guessing.  And I don't have the drunken spirit to rewrite it this morning, so. . . it will have to come another time.  I only get maudlin after dark.

This is a photo of Q's girl at the time, the one who was wittier than he.  Before I met her, he used to send me things she would write to him, and I thought he had made her up.  I didn't believe in the truth of a young girl with that wicked sense of humor.  When I met her, I was stunned.  I met her in my own home town.  Q had brought her here for some reason I don't recall.  I immediately resented her being his girlfriend.  It really pissed me off to no end.

But like all things one doesn't deserve, the affair went south.  I worry that maybe he learned that from me.  But I don't flatter myself.  Almost all affairs do.  At least the good ones and the bad ones we want so desperately to keep.

If it weren't so, there would be no literature except Godot.

Here in my home state, it looks as if no one believes there is a virus any more.  I'm certain Covid cases will spike next week, but we won't know it as the governor has ordered scientists to fake the numbers.  For most of my state, it will not be a problem.  It is pretty red here.  The virus prays on blue, so I am told.  They could have NASCAR races and nobody would be affected.  I have taken to wearing red to see if it will work like a vaccine.

Meanwhile, I'll share my love life with you.  This is the neighbor's cat and my little dirty alley cat.  The pretty one is the boy.  He comes over to see his secret girlfriend.  I can only live through them.