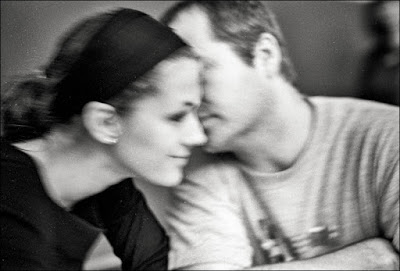 I have to post the photo before I send it to Q or he'll use it first.  This is from the same restaurant on the upper east side that the picture he used of himself on his blog was.  I was shooting with my first rangefinder, a Voigtlander R.  It was stolen from me a while back.  I wish I still had it and all the lenses.  It was a pip.

I just finished talking to Q.  FaceTime, rather.  It is difficult because he has a child who comes in and out of the room and I use a lot of bad language.  I am not like that around children, but I never know that he is there.  I am angelic in the presence of innocence.

I told Q that I was writing a story about him.  It comes from a few years after this photo was taken.  He and I took a cab to the lower west side for some reason that I can no longer remember.  A restaurant, probably.  The cab was trying to let us out and somehow we got into a shouting match with a fellow in a car.  It was complicated.  It got heated because the fellow was a jerky boy.  Being a hillbilly redneck from the South, I told him to fuck himself.  That didn't go over well.  He was a black fellow.  Beside him was a white girl.  I know. . . this is a very binary tale.  So when he stared calling me a cracker, I couldn't make heads nor tails of it.  He was young and tough.  Q said he was from N.J.  This was where all the N.J. kids came on weekends, he said.

The problem was traffic.  It was going the same speed as pedestrians, which meant we weren't getting away from him.  The jawing kept going on.  I stepped toward the car and said something awful, I am sure, though I can't truly remember what it was, and the black gentleman took umbrage and stopped his car and opened his door.  That is when Q stepped between me and the rough looking fellow.

Now, that's the tale.  Everything worked out as it does.  No one got shot.  No one got harmed.  But Q is the only boy who ever stepped between me and an ass kicking, and for me, it was memorable.

The thing is, he doesn't want to let anyone else beat me.  He wants to do it himself.