Looking Through the Glass 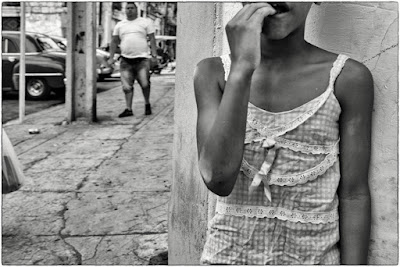 I was going to post a different photo this morning, but Q used it instead.  I found the image in a hard drive that I was trying to organize.  Oh, this stuff is going to take forever.  Looking through the files, I find mostly pictures of people on the street.  That is what I was able to do in most recent times, though not even that so much.  After retirement, I was going to hit the dusty highway and try again with more concentration and purpose.  Of course, that didn't happen.  Now, looking back at all the old images, I am struck by how important they feel.  People in parks, on the street, in shops and tourist attractions.  The world looks fun.  It looks taboo.  It looks dangerous.

It is like looking through a thick piece of unbreakable glass at a SeaWorld aquarium.  It is fascinating and far away.  It feels like you should be able to reach out and touch it.

I'm tired of posting pictures of the neighborhood, of the fancy houses and manicured lawns and the shadows on the wall cast by a perfect sun.  I am going into the vault to find some pictures to post here, pictures of the lost world.

I wonder if Q remembers where I took that photograph?  I wonder if he remembers the day?  It was raining.  We sat in a restaurant on the Upper East Side having a snack.  His beloved Camille was with us.  I had gone to see Ryan Adams in concert at the Beacon Theater the night before.  Sean had to work and Camille had thought about joining me but didn't come in the end.  It was a fabulous show, famous as the one that was the beginning of the end of Adams' career, the night when a fellow from the very rowdy crowd kept calling out and asking for Bryan Adams songs, the night when Adams started screaming at the fellow, took money out of his pocket and threw it at him and told him to get the fuck out.  But it was a NYC crowd, hip, jaded.  It was the wrong venue to pull that shit.  They were not impressed, and for the rest of his tour, people were calling out for Bryan Adams songs.

I was staying at the old Barbizon Hotel, once famous as a women's residence hotel that did not allow male guests further than the ground floor.  There is a scene in "Midnight Cowboy" where Joe Buck gets tossed out of the lobby there and tumbles into the street.  Notably, "Between 1940-1960, Joan Crawford, Grace Kelly, Liza Minnelli, Cybill Shepherd, Candice Bergen, Joan Didion, and Betsey Johnson made the Barbizon their home" (source).   I stayed there on my trips to NYC for a few years after they opened it up for male guests, too.  Like everything else in NYC, it is gone now and can not be retrieved.

Q, Camille, and I were visiting museums that day.  As we walked through the rain after lunch, moments after that picture was taken, Camille wanted to go into a chocolate shop.  The chocolate was hugely expensive.  I remember trying to shame Q for not buying her the most expensive things, a ploy I always use around my friend's girls.

"Oh, darling, if you were MY girl, I'd buy you anything your heart desired.  I can't believe he treats you like this."

He ended up buying her some very nice chocolates.

Every picture tells a story, don't it?

We won't be doing that again for a very long while, I'm afraid.  Those crazy, carefree days on the streets of New York.  Time to recalibrate.  Time to figure out what pictures of this life can be made right now.
Posted by cafe selavy at 9:17 AM