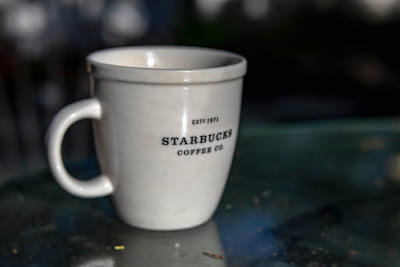 I've had this mug for many years.  I have five of them.  I must have had six at one point, but maybe not.  This is what I drink strong coffee from every morning.  It is big and thick to hold in the warmth. It is a small thing that makes me happy.

But one often looks for more happiness.  On Monday night, late after whiskey, I ordered a new Fuji X100V.  I paid to have a two day delivery.  Two days later, it had yet to ship.  I called the local photo store and asked if they had one in stock.  They did, and at the same price, so I called and cancelled my order from the bulk shipper.  I intended to get into the car and drive down and buy it straight away.  Then I remembered tax.  The bulk shipper out of NYC doesn't charge any.  State tax on this would be almost one hundred dollars.  I tried, but I couldn't get in the car.  I couldn't do it.

I will not buy the camera.  Not now, anyway.  I don't need it.  I have fifty trillion cameras and nothing to photograph.  That Fuji is a great point and shoot camera that fits in your pocket, but I won't be traveling any time soon, and if I did, I would take a bevy of cameras anyway.  I don't have an income like I did a few months ago  I can't spend money the way I used to.  I feel better not having the camera now.

It is a time to make do.  I can take pictures of my coffee cup with any of my cameras.  Hell, you should see the photos I am taking of my television.

I am trying to drink less.  I do stupid things when I am alone at night with whiskey.

I realized something startling yesterday.  I have not been touched by another person for months.  For those of you who are missing something due to coronavirus, I want you to think about that.  No flesh on flesh.  No skin on skin.  Not a hug.  Not a gentle hand on the shoulder or the cheek.

Each night, now, I remember my dreams.  Most of them have something to do with women.  Last night I dreamed of meeting a young woman.  I still can see her face, her body.  I was stunned that she was drawn to me.  In the dream, as in life, I did not approach her.  Rather startlingly, she stopped me.  In my tracks.  Why she wanted the affair was in the dream, again as in life, a mystery.

I have similar dreams almost every night now.  Surely the lack of physical contact is the stimulus.  What we cannot have in life, perhaps, we can have in dreams.  I've never remembered so many dreams before.

Maybe crazier, I am revisiting past dreams.  Last night, we went to a little strip mall that I had been to many times.  It has the greatest little shops.  I hadn't been in a while, and some of the shops had changed, but the layout of the little strip of shops was the same.

When I woke, I realized that place I had been to so many times does not exist.  But I remember everything about it and how it has changed over the years.  I realize that I have dreamed that place for a very long time.

What is happening?  You know I think other people's dreams are boring, but I am not reporting the dream.  I'm speaking of the act of dreaming.  Why am I remembering them so vividly and in such copious amounts?

Rhetorical questions.  I am still covered in their placenta, I guess.

The Troll in the White House has turned a significant corner this week.  I think even Hillary could beat him now.  It looks like we will have Placeholder Joe there for a few minutes.  We will be voting for the Vice Presidential candidate this year, a to-be-named African American woman.  That person is the only one who can keep him from being elected now.  Choose the wrong one, and Trump is back in the race.  There are months until the election.  Every day is a new horror.  I don't know.  Anything can happen.

And it probably will.