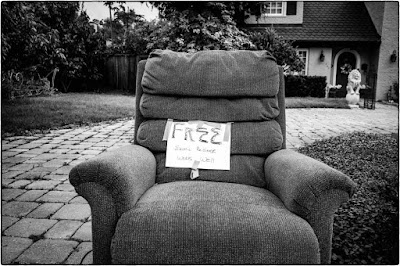 I did it.  I made my first day in 2020 without a drink.  I didn't get the d.t.s, either.  It was just. . . boring.  It isn't awful until dinner time, this not drinking.  But cooking without wine and dining without wine and not have the after dinner cocktail is unnatural, it seems.  Reality without modification 24/7 is not unbearable, but it is not enviable.  Not drinking is akin to having a medical condition.  Most non-drinkers have religion, I assume.  That is their drug.  Wrapped in orgiastic piety, they weather the storm.  Well, that and Crispy Creme Donuts or whatever their culinary drug of choice.
I chose herbal teas.  Much of my problem is that I am oral.  I must have a cup of something at my elbow at all times.
The really difficult thing about not drinking is that it seems a betrayal to all your friends, if you have friends like mine.  They are interesting people.  And they drink.  Cocktails are a meeting place, something you share.  People who don't drink might be smart, but they usually are not interesting.  George Bernard Shaw would be my case in point.  The guy was a fucking genius.  But reading his plays, as smart as they might be, is like chewing a piece of paper.  Compare them to the works of Tennessee Williams.  Williams isn't nearly as smart, I don't think, but holy smokes, those plays have flavor.
I'm not saying a person has to be a drunk to be interesting.  Drunks are boars--or bores (I never know which one).  Bukowski and Thompson both ruined their talents with drink.  There is no point in drinking oneself to death.  It is ugly if not hideous.  Have you ever known an alcoholic?  They shit themselves and piss themselves and get mean and nasty and argumentative, or they become just unbearably sullen.  The world of the alcoholic is shrunken planet.  Their interests fall away one by one until there is nothing left but the drink.
But a drinker, now there is another thing.  The well-timed cocktail ritual.  Selecting the wine for dinner.  The joy of the communal drink.  Those are things to be cherished.
Those are the things I do not want to give up.  But 2020 has been a terrible year for almost everyone.  It has been almost devastating for me.  It has been nothing but loss.  I won't go into it again.  And I have never been one enamored with drugs.  I like them metaphorically, but they do not appeal to whatever part of my brain they are supposed to stimulate.  I have always had strange reactions to drugs, though, always the minority percent of reactions.  Cocaine does nothing to me.  Some muscle relaxers and tranquilizers jack me up.  I cannot function on marijuana.  The only thing that acts the way it should with me are opioids.  They are sweet and lovely, but they are not a good option for the old day to day activities.
Besides, druggies are as boring and irritating as alcoholics.  The perpetually fucked up have their own commune, a secret handshake, a shared misery.
What remains?
Right now?  A cup of herbal tea.  No worries.  I'm not around anyone anyway.  This is probably the perfect time to get my drinking under control.  I wish to be the fellow you would like to have cocktails with, an interesting conversationalist over a shared bottle of wine.
Etc.
It's o.k.  I have incredible self-discipline.
And now. . . the news.  Fuck the news.  CNN falsely asserts that Rayshard Brooks was shot in the back for falling asleep in the drive through at a Wendy's.  Does anyone believe that is why he was shot?  Yes.  Many people were saying it.  This is the shit that is going to get Trump re-elected.  It is unbelievable that that could even be in the realm of possibility, but once again, the bullshit that "liberals" are saying and doing tears at the very fabric of their reliable base.  "
I am not a member of any organized political party. I am a Democrat."  George Wills.
Christ, it has never been truer.
Liberals are liars.  They say what they should, but they cannot perform the theory.  There are just enough of them whose stomachs are churning at what they see right now to cause them to sit out the election or write in a candidate.  Biden is sure as shitting going to choose the wrong running mate.  There are enough people who can't stand Trump but who were comfortable enough with their lives the way they were to vote for him.  Don't take me for one, but I am predicting.  There is no middle ground any longer.  There are only two poles.  Moderates are fucked.
Don't worry.  It is not just here.  It is everywhere.  These are global forces.  It is not just happening in your own hometown.
O.K.  That's it.  I'm done.  The weather here was beautiful yesterday and it will be beautiful once again today.  I want to do some moderate exercise (not radical) and have a long walk in the morning air.  One must find his pleasures where he can.
Oh, I forgot one thing.  Lola Albright.  I watched a couple episodes of "Peter Gunn" again last night.  The show is corny good fun, but Albright as Edie Hart is heaven.  They only give her a few minutes a show, but those are THE moments.  I want an Edie Hart so badly.  Say what you will about me.  I don't care.  Lola Albright was the real thing.  Read her bio.
Posted by cafe selavy at 8:26 AM