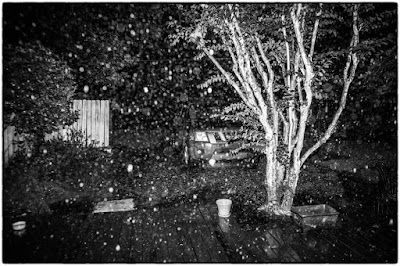 I took a picture of the rain.  Boy, it was really coming down that night.  I take pictures of many mundane things just because it feels good to have a camera in my hand.  It is fun to frame the world through the viewfinder.  I don't know why this is, but I know it is true.  Imagine this photo with someone standing in the foreground.  That's what I have to do--imagine.  I've thought of setting up my 8x10 camera in the yard and asking passersby if they would like to sit for a portrait, but I am probably already a suspicious character in the neighborhood.  I've thought about going someplace and doing that, too, so the neighbors don't know.  I should do it.
There are a lot of things I should do.
And there are a lot of things I shouldn't do.  Maybe I'll choose one today and try to stop doing it.  I'm thinking about it right now.  There aren't really so many things, just a few.  Should I quit passing pornographic pictures to my friends?  Quit eating sweets, which I don't do much of, anyway?  Hey, I know--I'll quit drinking.
I've had too much to drink this weekend.  Hell, too much to drink this entire year.  2020 has been a bad one.  I got bad news from my tax guy yesterday.  Have you all been keeping a running tab of the bad things that have happened to me so far?  It is a long list, long enough that I need to write them all down if I want to be able to recite them.  But why would I want to do that?  One of my recently retired friends told me yesterday that he keeps thinking that he will quit drinking, too.  It is difficult, though, when you haven't any reason not to have a drink mid-day.  It is a wonderfully decadent feeling.  Day after day it is.  By bedtime, though, if you are anything like me, you realize that you have overdone it, and when you wake in the night, you know it is time to stop.  And that thought stays with you until lunch.
I made a Perfect Gibson last night.  It was really good.  The second one is never as good as the first.  I switched over to scotch after that.
I'll try a dry day.  That shouldn't be too difficult, right?  Ha!
I'll become a hippie again.  I'll wear bracelets and anklets and necklaces.  I'll do yoga and meditate and scent myself with essential oils.  I'll drink exotic teas.  I'll eat figs and dates and limit my meat intake.  I'll limit myself to lamb and goat.
Lamb?  Jesus, that's a baby!  Is that what people eat?  No, not lamb.  No veal, no lamb.  Maybe only veggie burgers.
I'll read the Dhammapada.
You see the lengths to which I will need to go?  I'll need something.  I can't just give up a bad thing.  I'll need to replace it with something irritatingly good.
I watched two videos this morning about which people are talking.  One was Trump's walk down the platform at West Point.  The other is the shooting of the black man in Georgia.  I'm afraid I don't agree with most people's interpretation of either.  Well, most people with whom I associate.  I think I would look worse that Trump did walking down that ramp.  There is no need to criticize a 76 year old man walking carefully.  It is cheap.  There are real things to criticize him for.  Almost everything.  But that is just stupid.  And the cop who shot the fellow running away shouldn't have shot him.  But that is why I don't own a gun.  If I was doing what I was paid to do and a fellow starts punching me and then steals my taser and points it at me. . . well, I'm a hothead.  I don't want to shoot anyone.  But in a moment like that, who knows?  Call me crazy.  I'm not saying you shoot a man who is running away.  Sure, he was a criminal, and sure, he was violent. . . .  I wouldn't want to be a Po-leese-man for anything right now.  Nope.  The po-po are gonna get their's.
Yea, maybe I'll quit drinking today.  Maybe I'll gain a little more self control.  I mean, I say way too much crazy shit.  I'm sure it must be fueled by the liquor.
Posted by cafe selavy at 8:24 AM