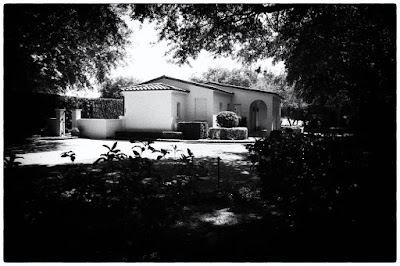 People here are complaining about the heat.  Last night at nine o'clock it was still 90 degrees. I spent the day on my feet as your correspondent out and about in the diseased and abandoned world.  I walked up and down deserted streets in the relentless inferno with my two Rollieflex cameras taking useless photographs of partial things.  I was a sweaty mess, but it was fun.

I relearned a lesson, though, while out shooting film.  Always take more than you think you will need.  I burned through what I had before I was done, so I made the long, film-less walk back to my car and drove home.  I felt I hadn't done enough corresponding yet, though, so I grabbed another camera with some color film and hit the streets once again.  It was mid-afternoon, and man, it was REALLY hot, that kind of pressure cooker hot you only get here and in that swath of loathsome summer hell stretching from New Orleans to Houston.    Have you ever been to Houston in the summer?  Why, oh Lord, why?  I know people who come here to my own home state in August, people who have lived here, people who should know better, and when they get here, they complain.  I think, what is wrong with you?  Have you lost your memory as well as your mind?  August and September here are the killing months.  There is no respite from the heat and humidity.  None.  Those who are complaining now will succumb to madness as sure as shitting come that murderous time.

But relief is on its way just now--a giant Saharan dust storm.  God knows what zoonotic plagues will accompany that.

I am hellbent on escaping.  I'm still looking for a cheap, light, small travel trailer.  They are difficult to come by I am finding.  I texted a couple on Craigslist last night who are advertising a 1962 Airstream Bambi for $2,000.  I haven't heard back yet.  I let myself get excited when I saw the ad, but I know that things that look too good to be true usually are.  I am prepared to be disappointed. 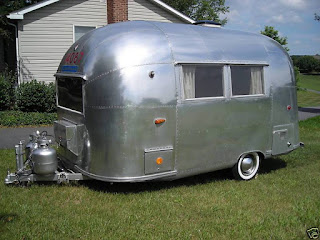 I remember last night's dreams vividly.  I'm not going to bother you with them except to say that I think the last thing you watch on t.v. is what you dream about.  I watched videos on small campers and dreamed about them all night long.

The house in the photo above is on the site where a home that was once a speakeasy stood. Al Capone used to visit in the cooler months for a little R&R it is reported.  The house stood until the fellow who bought the property a decade ago knocked it down to build his office.  The man across the street from where it stood said that when they were remodeling his house they discovered a tunnel that was built beneath the street from the old gambling speakeasy, an escape tunnel, I guess.  We called the old place the Pepto Bismal house because of its color.  The fellow who owns the property now bought four houses that surrounded the one he was building, one for his pool, one for his office, one to expand his grounds, and one to build a garage to house his many cars.  The last never happened.  The lakefront across the street from the house is huge and people mistake it for a park.  Many of the photos of the moon you've seen here have been taken there.  The fellow who owns the place has other houses and isn't around that much, but he's a nice guy and doesn't seem to mind anyway.  It is wonderful to think, though, of my neighborhood's gangster history.

Well, we didn't get a lascivious story from old Priapus after all.  He seems to have contented himself with a coffee maker, which is good.  Tasty coffee is important.  Mom and dad need to stay fueled.

Still, I may try watching something sensual before I go to bed tonight. If that works, you will be the first to hear about it.  Right now, I have no one else to tell.
Posted by cafe selavy at 8:07 AM