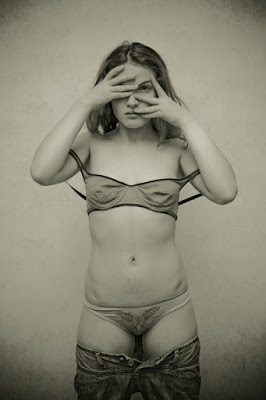 This photo hangs on a wall in my house.  You may remember it from years gone by.  I kept touch with her and her boyfriend, the photographer, who live in Belarus for a long time, but I wouldn't know how to reach them now.  Belarus is a most repressive state.  Who know what has happened to their lives.

I always liked that photograph and still do.

Tonight, I have grilled a beef kabob and some oiled and spiced Brussels sprouts, and I have cooked some jasmine rice.  The evening had enough of a breeze that I decided to eat it on the deck with a bottle of blended red wine by Chloe.  There are some nice blended reds, I think.

While I cooked, the cats came for dinner.  Fed, the neighbor's cat vanished, but the fat feral cat stuck around.  She is jumpy when I move or do anything too quickly, but tonight she came close to ask for more.  I gave her some of the steak from the kabob.  She ate it, then moved into the yard some fifteen feet away to primp and clean and give me the same look I've seen on satiated lovers.

As I ate, a young couple from NYC walked by with their baby stroller.  They are the nicest kids in the  world.  They always pause for conversation.  His parents live around the corner, though I don't know who they are, and the couple has rented a house just up the street in the opposite direction.  They are a handsome pair to be envied, and I don't know why they take an interest in me except that he remembers me from the gym when he was in high school here.  They moved back from Manhattan when the coronavirus hit.  They said tonight that they want to invite me over when it is safe.  I said the baby will be walking by then.  Yes, they said, that could be.  We chatted a bit longer.  They said I looked like I was enjoying myself.  I said "as much as can be expected."  They lingered longer than necessary.  I've fairly fallen in love with the idea of them.  Such things.

Now it is time for scotch.  Q wrote me something that I will steal and paraphrase for my own.  Scotch is like a lover--the sickness and the cure.

L. sent me a book, "Barbarian Days," by a war journalist about his surfing days.  I started reading it before I cooked.  It is one of the reasons I ate outside tonight.  He writes in an essayist's style rather than a poetic one, but the story is good, and it moved me to eat outside. . . in nature.

Q FaceTimed me last night at the end of the last sentence.  I never got back to writing.  Q called to serenade me with his guitar again, I guess, and to criticize my blog on its recent posts.  C- for some, he said, and Fs.  Mostly Fs.

He poured another whiskey.

As I've often quoted, Frost said that "everything must go to market."  It is the place where value is assessed.  It is useless to argue with the market.

The Top 10 U.S. Magazines by Circulation