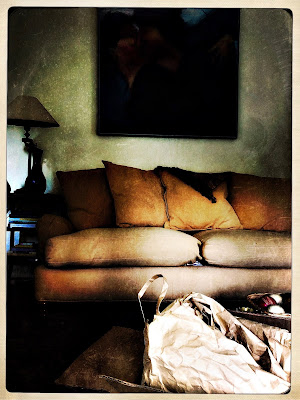 I made this photo with my phone.  There are very cool apps on it, but the thing is, anyone can do it if they play around with the apps enough.  There are endless combinations.  I just settled on this out of sloth.  I posted it somewhere on the internet, though, and it got more "likes" than my "real stuff."  Maybe I should just stick with iPhone apps.  I mean, I like them, and I like this.  I like grunge.  An image is an image no matter how you make it.  Right?

I work too hard at the "other" shit.  I am swimming against the zeitgeist right now.

I will write my post (mostly, probably) tonight as I have an idea of heading to the coast early in the morning to make pictures.  It will be hard, of course, to leave the comfort of my home, but I feel the need to get out and do more.  There is not guarantee, though.  We shall see.

I went to a store today to look at new washers.  Now I just want to fix mine.  My mother scoffs at me, but it is an idiots work, and I am nothing if not an idiot.  Three screws and a hose.  I know I will fuck up the hose part, but what the hell.  It is a man's work.  My dick will surely grow.

I mean, I am a broken machine.  The parts are fragile.  Some are broken.  Nothing works as it should. It is terrible.  But tonight I was watching Anthony Fauci on t.v.  Which one of his eyes is functioning?  One of them is not.  It is like watching an interview with Jim Harrison.  One of his eyes is blind for sure.  He is 79 years old, and though he has access to the best doctors in the world. . . .

I have many more problems than that.

Morning.  I did not finish writing last night.  Or maybe I did.  I don't think I'll be going to the coast today.  I decided to take a walk yesterday despite having a bad left calf.  I was going to wear a brace, but I forgot to put it on and didn't realize it until I was some ways down the road.  It seemed to be doing fine; that is, until I got to the furthest point from home.  I had to walk slowly and baby it all the way back.

When I got out of bed this morning, it wasn't just my calf that hurt.  Apparently, I screwed up my knee walking funny.  It hurts to walk through the house.  Like I said last night, I'm a broken machine. The parts are wearing out.  When will I be able to wander and make pictures again?

The feral cat is weird.  Sometimes she doesn't show up for a day or two, but her boyfriend does.  He is on the deck now, alone, as he was last night at dinner time.  Where does she go?  What does she do?  One would think free food would do the trick.

She's done this before.  She'll turn up.

I'll leave you with a song.  A real rocker.  I heard it on the college channel driving home from mother's.  No head banging now.  Just something sweet, like the romance between Peter Gunn and Edie.