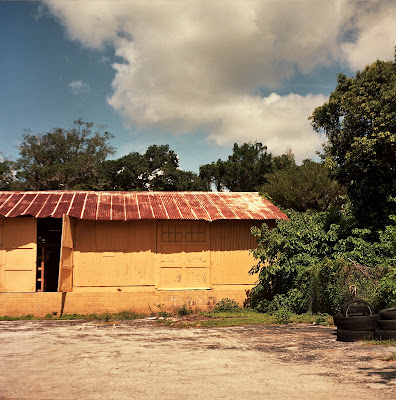 Poor Q.  He never made it to Wingo.   More drugs are needed to get there, that and an insatiable desire for REAL adventure.  I've been there.  It isn't much.  I took this photo a few years back after RUNNING those railroad tracks with a backpack full of camera gear and water bottles.  You can't do that on beer and Xanax, of course.  You need a pocket full of uppers to get you there.  The advantage is that speed will shrink your pupils to pinpoints which is an advantage on a really sunny day.  The downside is that once you get there, you realize there was never any reason to go in the first place.  You'll need plenty of water to get you back.  Speed dehydrates you faster than a sauna.

I've tried to tell him that all this running around the countryside is a useless waste of time.  Get a studio, I told him, and lots of parent permission slips.

But there is no use in being a photographer any longer.  We've seen it all.  Everything has been photographed to dust.  Photos are only good for FaceBook and Instagram.  Even the "pros" have their social media accounts, and many of the photos they upload were taken with their phones.  There are dozens of apps that will give your phone photos a crazy good look.  The drummer from my old band has an MFA in photography from the University of San Francisco.  He made a pinhole camera from a fifty-five gallon barrel and attached it to the roof of his car.  He made photos that had hours long exposures, then printed the results in monstrous sizes.  Now he only uses his phone.  He hasn't used anything else for years.

Besides, cameras will get you killed or locked up.  When I carry a camera, which is ever day, I get suspicious, mean-assed looks.  "What the fuck are YOU up to," they seem to say.  If I am standing on a street corner looking through the viewfinder, people honk and yell things out the window of their cars.  If I am in rural areas, sometimes people will throw things.  There is something wrong with country people, I guess.  Those boys are all half-retarded.  Don't try arguing with them.  You just end up getting your ass kicked.  I think most of them want to become policemen.

Sometimes, if you are photographing in a crowd, a real policeman will come up and ask you what you are doing.  There's a hard line to answer.  Sometimes they will say there have been complaints.  That is when you want some credentials, preferably from a right wing organization.

"Oh, I'm just out here trying to document wrong doing by the Antifa crowd.  My newspaper, the Fox affiliate, seems to think there is going to be some REAL trouble today.  They also wanted me to keep an eye out for some of those trans people.  That's becoming a real issue, you know.  Now if I see anything suspicious. . . I'll let YOU know right away.  So far, everything seems to be quiet."

Since I have no credentials, and since having an officer of the law question you in the middle of the crowd tends to make you stand out, I usually head back to my car quickly before the scene gets ugly.

But you know how it is.  You can't tell kids anything.  They have to learn for themselves.  If Q doesn't get a studio, he still has his child and dogs to photograph.  All I have is. . . well, nothing really.  Lots of pictures of the birdbath and occasionally the wheelbarrow.  It's good to use really expensive cameras when photographing them.  I need to get some more gear, though, to really show them best.  They'd look really swell with a new medium format Hasselblad digital camera.  That would be awesome.

Maybe I'll start making dioramas and using little toy figurines.  But I'd probably get cancelled for that as well.
Posted by cafe selavy at 8:32 AM