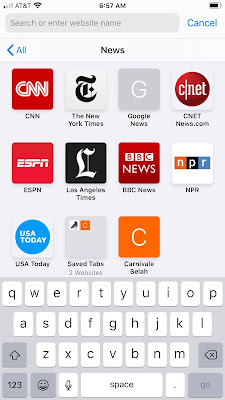 Haven't I been telling you that The NY Times reads my blog and takes their cues from it?  A friend sent me this screen shot from her phone--my blog now ranks as The News!!!!


*Note--Carnivale Selah is exactly the same as Cafe Selavy *

I am also commentary, but I have an advantage over most reporters.  I have a head for science. 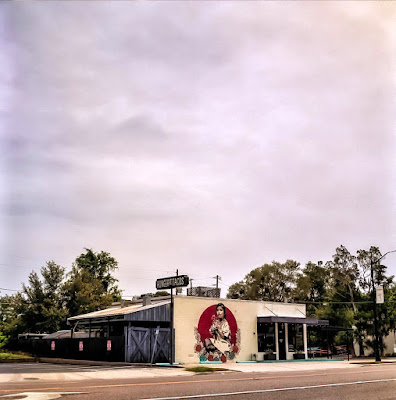 If the experts at CNN and MSNBC are correct, the Supreme Court will rule that Trump must release his tax reports to investigators in the Southern District.  My fear is that once they are released, it will be another Mueller Report "gotcha" moment that doesn't amount to what Trump Haters hope.  I've just been disappointed too many times to put any of my emotions into this one.  Will they find that Trump has taken millions in Russian bailouts?  Surely not.  There would be, at best, some slithery trail of money that would be hard to trace.  It will be much like me opening the hood on my car when it won't start or breaks down.  I'm just looking for the big switch that says "On/Off."  It ain't there.

I just don't trust the liberal media any more.  CNN is going to swing voters toward Trump with this kind of "reporting."


(CNN) The debate among smart political handicappers is no longer whether former Vice President Joe Biden is a clear favorite over President Donald Trump to win the White House in the fall.

It's now whether Trump might lose big enough to drag down all Republicans on the ballot in November, creating a hole that it could take years for the GOP to dig out of.

"This election is looking more like a Democratic tsunami than simply a Blue wave," wrote The Cook Political Report's Amy Walter on Wednesday. "Republican strategists we've spoken with this week think Trump is close to the point of no return. A couple of others wondered if Trump had reached his 'Katrina' moment: a permanent loss of trust and faith of the majority of voters."

This may be accurate, but I think we have to keep it under wraps.  There are people who are on the fence who will want to keep things close.  "What the hell, Trump is going to lose anyway."  It happened last time.

Biden is set to make a BIG mistake.  He is going to unveil his economic platform.  He has gotten far ahead of Trump in the polls by not saying much.  He doesn't need to.  Nobody is voting FOR HIM.  They are voting against Trump.  As soon as Biden starts expounding his ideas, that margin is going to shrink.  The campaign needs to keep him tucked away.  Don't speak, Joe.  Just don't speak.

Ghandi famously stated that a person should do at least two things every day that he or she doesn't wish to do.  Churchill infamously said he did--he got up each morning and went to bed each night.  We are cancelling Churchill now, of course, and will be left with Ghandi, so I will go to the track to try my broken hamstring today.  Oh, I'll be careful, don't worry.  And there are two things I don't want to do.  Thank you, Mahatma (link).

I will also make a list today of people I want to cancel.  It might be fun.  Remember, I am one who has been Cancelled.  Erased.  Nullified.  Axed.  It must give some a peaceful feeling to re-contextualize their lives, to wipe out "bad" history.

But it won't work, you know.  Dreams.  You can't control them.  The past comes back to either please or haunt you.  It may be in the form of others, or it may be in the form of your own bad character, but those specters cannot be deleted or controlled.  I had dreams last night of the past.  I was fortunate, though.  They brought some clarity.

Maybe I'll make some pictures today if I get out early before the rain, and I won't do that by sitting here watching the morning pass.  And so, until next time, this is your intrepid reporter wishing you a good day. . . and good news.
Posted by cafe selavy at 8:05 AM