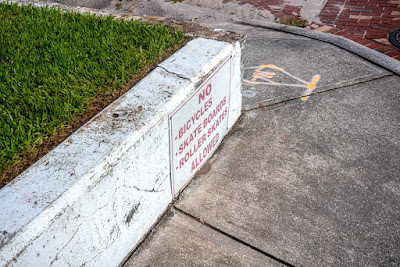 I wake and look at the clock.  It is an old clock radio, one of those rectangular plastic things with a faux-wood finish, buttons you push in different combinations to set the time or the alarm, a.m. or p.m., a bandwidth dial with a big round knob, and the time display in red lights.  The time display is small and bright, but my vision is shot for such things and I have to squint hard for a while to get an idea of the time.  Today it is either five or six.  I can't tell.  Intuition, though, tells me that it is five, but I have woken because of bad thoughts and bad dreams, so I pretend that it might be six and turn on the light.  It is easier for me to read the clock with the light on.

I think about getting up.  I walk to the kitchen to turn on the coffee pot, but at the last moment, I change my mind and go back to bed.

That doesn't work.  I have pain shooting through my right back and hip, sciatica, I presume, for what reason I can't figure out. I haven't done anything to cause it.  Perhaps it came about when I was limping around town with my camera on my gimpy left calf.  Does that makes sense?  Maybe.  My body seems to be finding new ways to disable itself.  The pain makes me think about the accident and those enduring pains that are not like the sharp one I feel in my back and hip just now but are with me always.  I start to remember the dreams that woke me up.  Was my dream really set in the time of Covid?  There were two of us.  Who was the woman?  It seemed so natural, but why were we walking up on that highway?  We were in the car and there were two dogs, a small one and a puppy.  I was petting them.  She was driving.  Who was she, though?  It is like a movie where the other person is not fully in the frame.  I remember her shoulder, her hand.  I think it was Ili.  It must have been Ili.  Why dogs?  The dogs brought me comfort, I remember, but I don't want dogs.

But there were no dogs and no woman, just me alone in bed with pain and confused bad memories.  Ten minutes later, I get up and start the coffee.

It is too early to read the news, I think.  The electronic papers will be different at six.  I decide to write before I read this morning.  That is the way I used to do it, isn't it?  I try to remember.

Yesterday should have been grand.  I got three packages in the mail.  I knew they were coming, and I knew what two of them were, but what was the third?  I hadn't a clue.  FedEx sent me a notification but did not include a sender.  Strange packages scare me.  I am always paranoid that they are paperwork from the government, something that will change my life irrevocably.  I've read too much Kafka, perhaps, but the paranoia remains strong.

When the package arrives, however, it is two pairs of cotton/linen shorts from China that I had forgotten I had ordered.  Shipments from China take so long, it is impossible to remember you've ordered.  I am delighted with the surprise, of course, and relieved that there are no indictments.

Later, the postman comes.  There are two packages.  One is a lens cap I've needed for a long time but could never figure out which one to order.  This is the third time I've ordered a lens cap for this lens.  The other two were the wrong size.  This one fits.  Hallelujah!  I feel better.  The other package is something of a miracle.  Back in the studio days when I was still able to shoot Polaroid film, I bought a high end camera that shot the 4.25x3.25 pack film.  The camera is a real dandy, but since the demise of that film, it has sat dead.  Two of them.  Of course I had two of them.

Last week, I came across a fellow who is 3D printing 4x5 backs for the camera.  I bought one, thinking it will surely be something I don't like.  I open the package and and hold the thing in my hand.  It looks fine, not flimsy nor ratty.  I get the camera and take off the Polaroid back.  It is easier than I imagined.  I slip on the new 4x5 back.  It fits snuggly and well.  I get a 4x5 film holder.  Now comes the tricky part.  I am not very good at puzzles.  How does this work?  At first I am a little confused, but it is simpler than I thought and within a few minutes, I have everything figured out.

And holy smoke, I am pleased.

I decide to try the new camera.  It has been a bright and sunny day, but suddenly it isn't.  The wind begins to blow and within seconds, there is a driving rain. I pick up my phone and look at the weather app.  The radar shows the storm.  It shows that it will last the rest of the afternoon.  There will be no camera work today.  Having already eaten lunch, I decide to take a nap.

Eventually the rain becomes intermittent, and I decide to take the film I shot the other day to the photo store.  I take my new camera contraption with me to show the kids in the photo lab.  I don't know why, really, but they think I'm a rock star.  I knew they would be wowed by this new thing.

After the photo store, I make a liquor run.  The scotch I drink has had a 33% increase in price in Covid times.  It is horrendous, and I often think I will quit drinking.  That will show them.  Rather, I buy another bottle and some wine for dinner.  Then I go to my mother's for my afternoon visit.

The rain has stopped, but the skies are still gray.  The afternoon rains are important here.  Without them, the heat is too intense.  This afternoon, it feels almost chilly.  I look at the weather app.  Seventy-four degrees with a breeze.  I tell my mother I feel a chill.  That makes her laugh.  We talk about the news a bit.  She, like the rest of my hillbilly relatives, is for Trump.  She gets all her news from Fox.  I try to debunk the things she tells me, but she watches Hannity.  With what can I counter?

My mother tells me it is my tenants birthday.  Really?  I am a horrible person when it comes to things like this.  The tenant has been gone all summer.  I text her.  Is it really your birthday?  It is a big one.  She is now the age I was when we met seventeen years ago.  "Ewwww," I text.  "Happy Birthday."

I go home to make dinner and listen to the news.  CNN, MSNBC.  The same old shit they have been saying for months.  Still, I listen as I boil the noodles, chop the garlic, open the can of chicken.  It is a simple meal tonight, one bowl of spaghetti and garlic and chicken and peas.  I throw the frozen peas in with the spaghetti noodles at the end.  Salt, pepper, red pepper, olive oil and a touch of Balsamic vinegar.  It is an easy meal.

I decide to have a scotch while the noodles cook and the wine chills.

Dinner done, dishes washed, decisions must be made.  I will not watch the democratic convention, I decide.  I feel guilty about that, but I don't want to.  It is historic.  I should watch it.  But why?  So I can talk about it later, maybe twenty years from now?  I won't be around then.  No, I am not going to watch it, I decide.  I pick out a photo book to study thinking of all the things I would like to shoot.  Maybe I will chance some travel, I think, but what would I see?  Empty streets?  Buildings?

This morning when I wake, I am alone with my nightmares and my pain.  When I get up for good, I see myself in the mirror.  I don't look at all like I feel.  Somewhat, maybe, but not like the crippled, lonely fellow lying there in the dark.