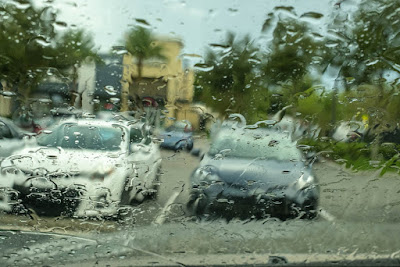 I haven't moved for two days.  I haven't even gone to see my mother.  I've made a couple forays to the grocery store, the camera store, the liquor store, but other than that, I've settled in.  Something has gotten hold of me, and I guess I am going to have to wait until it works itself out.  So it seems.

Late yesterday afternoon, however, I stepped outside to feed the cats.  I put the cat food away and grabbed a drink and went back outside to chat with them.  I walked to the end of the driveway to the street's edge to look around.  The neighbor's cat followed me.  He is a funny cat, a tough motherfucker but affectionate.  He comes to see me even when she is not around.  If I am sitting outside, he will come and lie down close to me.  I guess we are pals.

Standing there, glass in hand, I was chatting him up when I saw a girl with a tiny dog walking up the street toward me.  Well now.  I looked back at the cat and said, "It looks like something's coming," and out of the corner of my eye, I saw her cross over to my side of the street.  As she approached, she was smiling.

"Hello," I said.  She was thin and had a pretty smile.

"He's only a few months old."  She told me what type of dog it was, but I don't remember, maybe an Australian Jack something, but probably not.  Whatever she said, however, I was ready to comment.

"He already is," she said grinning.  She seemed in no hurry.

The neighbor's cat was behind me now, inching closer to the pup.

"That cat isn't afraid of dogs," I said.  "He likes to go nose to nose with them.  He's pretty fearless."

The little pup was smaller than the cat.  Really, he was just a fur ball with that thin belly skin puppies have.  He was taking a submissive pose as the cat crept closer.  I reached down and gave him a good rubbing.  Everybody loves a puppy, right?

"So, are you a student at Country Club?"

"Are you going to class?" I asked thinking it weird as the school looked closed.

"They are all online, but I work for the Bush Fund as an administrative assistant."

I was amazed she was still standing there, but she seemed in no hurry at all.  I, in my inimitable way, got the scoop on where she grew up, went to high school, went to undergrad, how she got in with bad grades and low test scores, etc.  She was quite forthcoming.

"Do you know Irelander?  I live right behind her."

"Irelander?  Sure, I used to date her niece."

Irelander is the sister of the father of a girl I used to date, the obscenely wealthy one that moved in with me after our first date.

"Yes, but that was a very long time ago when she was a student at Country Club, too."

"I used to have a Vespa," I said.  "It's a sad tale, but I got whacked.  Hit good.  Sent flying."  I am ashamed to tell you that I went through the list of broken things I suffered.  "But," I said, "they are great fun, really, and I actually think about getting another."

"You can come up and ride mine any time," she said.  She seemed a very generous girl.

"Oh, like 80.  My father said I could ride that thing back home," a place on the coast about three hours away by car.

Bug eyed, I asked, "How fast have you driven it?"

"I've only gone about forty on it."

"I got mine up to fifty once and knew that was horribly wrong."

"I only drive mine to school and back, really."

"Yes, they are great for that.  You can park them anywhere."  It is one of the reasons I want another one so badly.  "And they are just fun."

I hadn't talked to a girl in a very, very long time, and I didn't want to seem eager or overwhelming.  I hadn't looked at her so much as her pup and the cat.  There was no way I was going to give her that old man laser stare that tries to penetrate the brain.  Nope, not me.  I'm a real cool boy about that.  Glances but no staring.  Lean out, not in.  Be witty, not intense.  Keep your hands to yourself.  Etc.  But it registered with me that we were both wearing Covid clothing, me in my v-neck white t-shirt and baggy pedal pushers from China, she in thin parachute pants with ankle ties and a thin white top. Hippies, we were, the Bohemians of the neighborhood.  We had been talking a long time, and I didn't want to strain it, so I headed the conversation toward a natural ending.

"It was nice to meet you, Lenore.  I imagine I'll see you again."

"Oh, I'm certain of it.  I walk this little rascal around the block many times a day."

Wait!  What?  I shook her hand?  I guess I forgot Covid protocol.  I mean, I fell back right away into the normal old ways.  But she hadn't hesitated.  She didn't seem to mind.

Christ, friends, that was profound and sincere fun, and I realized how sad life is without it.  I realized, of course, that I was much older than her parents would be, but I wasn't looking to get married.  I just enjoy attention.  From girls.  Just girls.  Yes.  That is what I like.

Back inside, on the big leather couch, scotch in hand, I calculated that I had not touched another human since February.  How many of you can say that?  You all have have husbands, wives, lovers, and children, and though you think you are isolated, you are not.  That thing, that Sherwood Anderson/Winesburg thing.  Touch.  It is how we communicate.  We lie with words, or merely confuse, for language is terribly imprecise and slanted.  But touch communicates directly.  Read "Winesburg, Ohio" if you haven't.  We are inarticulate in our desires.  We desire the to talk through the skin.

To wit, I am going to the beauty parlor on Thursday.  I am going to get beautified.  It is scary, you know.  I am scared.  But I will have my hair washed, my scalp massaged.  I'm sure I will be like a wild animal and get a boner right away.  I will have to warn her.  Oh, but I am being gross.  It will be automatic and involuntary, but I am not as sexual as I am sensual.

I wouldn't have thought of this if not for meeting Lenore.

I promise not to stand at the end of the driveway waiting.

One more thing.  I worked through film simulations on the new camera.  I shared with Q who has several Fuji cameras, and now he wants to buy a new one.  He's enjoying mucking about with the settings.  I have been working through different formulas on the camera and have gotten close to the look I desire, but I still have to work the images in editing software to get it where I want it.  I will have to keep working to get it to come straight from the camera that way.  Here is an example of what I did yesterday.

Yea, I holed up for a weekend and didn't do anything.  I didn't even go to see my mother.  I settled in. Just me in my bubble drifting toward the void. 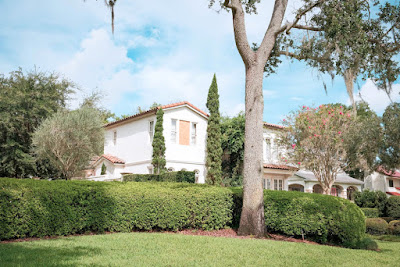