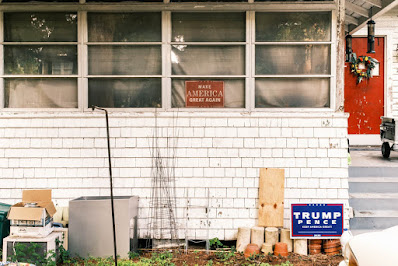 In an alleyway just behind the Boulevard in the chi-chi part of town stands an old, ramshackle house, probably from the '20s.  Whoever lives there wants to Keep America Great Again.  Of course.  Living the American Dream.

All the other old houses on this alleyway now belong to lawyers and architectural firms, neatly restored and updated.  Many are probably for Trump, too, but I haven't seen any signs.  I wonder if the people in this house enjoy strolling the Boulevard in the evening?  I wonder if they take advantage of the luxuries that surround them?

My mother, finished with her doctor's visit, blood pressure taken and blood drawn, was happy to suck down a strong IPA yesterday afternoon.  When it was gone, she asked, "Do you have another one?"  Nope.  I was careful and only brought two.  My mother will have to get loopy on her own.

After beer, I got a big sushi takeout and a large bottle of unfiltered sake.  This was my third Friday in a row, I think, and the polish seems to have gone off the meal.  It was good, don't get me wrong, but it wasn't the thrill it was before.  Anything that becomes routine, I guess. . . as most of life is now.

But I DID have a social outing yesterday.  I met a friend from the factory days at a birds of prey rehab center.  There, you can stroll around and look into cages of damaged owls, falcons, hawks, eagles, and the non-predators, vultures.  The owls are most interesting, I think, for they look directly at you and follow your every movement.  I talked to them, of course, but they didn't have much to say.

"They are like me," I said to my friend, "badly injured after being hit by a car, busted up, unable to fly.  They could put me in one of these cages, and I could look out at people like this"--here I mugged silently for the audience--"and people could ponder me in wonder.  It would be like something out of Kafka."

She laughed uncomfortably.  I guess people don't like to think about how busted up I am.

I used some zoology on her, mansplaining things she might not have known about birds or about biology in general.  I talked about the disappearing pines and how sad that made me and gave her the history of lumbering in and around my own hometown.  I told her how a town a few miles to the north used to use Spanish moss to make mattresses they shipped and sold around the country.  She found this a bit difficult to believe, but I told I had researched it and it was true.  I talked about the railroads and the the river used to ship the state's goods both north and south.  I hadn't talked to anyone for months, but I was soon as erudite and witty as before.

Or so it seemed to me.

A couple hours of social interaction went a long way to making me feel almost normal once again.  You know. . . normal for me.

The heat is back, and though I tried to dine outside, it wasn't comfortable at all, and after finishing my avocado salad, I moved back into the air conditioned world, back to the t.v. tray before the television filled with two types of nigiri, garlic edamame, miso soup, and a large bottle of sake.  Eschewing the news, I put on a sailing video from YouTube.  During my visit with my old colleague, I had told her about my desire for a Scamp. She is a hell of a woman, never married, and very adventurous.  She travels alone around the country often, and she latched onto the idea with uppers and lowers firmly locked.  Her interest piqued my own again as well.  What the hell, I thought, maybe I'll buy a new one from the factory.  They are like boats, in a way, living in cramped quarters, cooking on small stoves, living in an organized and precise way.  As I watched the sailing video, I was thinking of the Scamp.  I was thinking of both.  Eating the sushi and imagining a life "out there," I was almost certain I was ready to go.

Perhaps it was the sake and the after dinner whiskey that got me.  I hadn't eaten anything all day before this, and perhaps this calorie and alcohol dump hit me hard, but I fell asleep sitting before the endless videos before I'd put everything away.  Wiping the drool from my chin, I did the minimal clean up, took my vitamins, and headed for the bed.

It was nine o'clock.

I didn't wake until well after sunrise.  I lay in bed, still numb, for a long while.  Boredom moved me eventually, so I got up and hit "Go" on the coffee maker, listening to the burr of the grinder, smelling the aroma of the freshly ground beans.  This is one of life's delights, I thought, and wondered if I'd have room enough for this on the Scamp.  As the coffee dripped, I went to the bathroom and thought of waking up in a campground or a Walmart parking lot and starting the day.  It would be much the same, me on the computer, reading, writing. . . . Pouring the first cup, my body was still in the bag.  I expected as much, however, when I downed the evenings soporifics.  Mornings are always groggy after such a night.

Ten and a half hours in bed.  I don't remember dreaming.

The morning has broken full of diamonds and light.  The sky is crystal clear and a paler shade of blue.  Another cup of coffee.  I need to get out there into it, but I am slow.  I needed those pills last night, I'm afraid, but this morning is another thing.