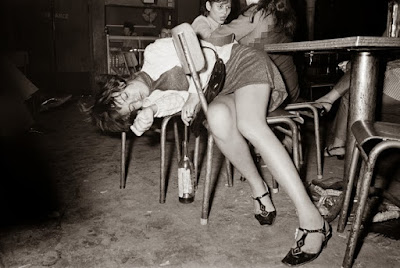 I stumbled upon something amazing yesterday that I should have known about before.  Billy Monk, the South African photographer.  He was a picaresque criminal who worked for a while as a bouncer in The Catacombs, an underground club in Cape Town in the 1960's.  For that brief time, he became a photographer.  I have not read that he made pictures anywhere outside this club, but the pictures he did make. . . oo-la-la.  They are what were once called "doozies."

His is not a life I hope my friends would admire or aspire to but one which they would be fascinated by nonetheless.  I am.

True disclosure, my father's side of the family had many such characters as Billy, roustabouts making money in society's shadows, colorful people with wild lives and wilder tales.  My father was the white sheep of the family working for a living all his life.  He was on the up and up.  But when we would go to Ohio for a visit, I would experience the weirdness full on.  My cousins were all bent toward the shadow life in one way or another, and I was fascinated.  In my brief excursions with them, I saw a side of life that my mother and father had kept from me, dark and sexual and sleazy.

But that is not what this is about.  We can save that for another time.

You might want to read a brief article that can introduce you to Billy Monk's life (link).  You can have a quick look at some of his pictures here (link).  SFMoMA has a brief video introduction to his photography (link), and there is a short documentary that, if you are still interested, you might want to watch (link).  If that is not enough, there are some short clips here that didn't make it into the video but which are colorful bits on their own (link).  Finally, there is a website bearing his name (link).  I ordered the book of his photographs on Amazon yesterday.  If you are interested, you might want to hurry.  There weren't many left.

This is the calamitous way that social change begins, I'm afraid.  Whenever there is injustice, as there was in South Africa, the grimy underbelly of society are the first to rebel.  Why is that?  I guess there is less to lose.  But it is certainly more complicated and deep than that.  I think back to hippie days of yore.  Who were the first kids to become "freaks," to hang with "the crows" and experience drugs and the sexual revolution?  It wasn't the boys in Civitan Club or the girls from the Tri-Hi-Y.  It was people who were already in some way marginalized and living on the outside of the inner circle, people tired of gazing in from behind the multiple heads of a very large crowd.  It begs the question of nature/nurture.  How long do people have to be treated as undesirable before they are?

But I've run with losers long enough to know that there is a twisted gene in there someplace, too.

The second wave of social change comes from insiders who have a liberal tendency.  One day they show up with a Nehru jacket and love beads and little round sunglasses, and after the first shock of the new, they are considered eccentric and cool.  And the next thing you know, the head cheerleader or the homecoming queen buys a ticket and takes a ride, and suddenly the hogs are greased and the gates are open as Dr. Thompson would say.  And when you return to school the next fall, high school has somehow changed.  The next thing you know, you are eating chitlins and collard greens at Mama Lo's Soul Food Kitchen,

At least that is how I remember it.

So, yea. . . expect things to change here on campus.

But maybe not.  I mean, every time I see a Biden campaign ad, he is whining in that sad little mourning voice he likes to use to show that he is sincere.  His campaign highlights The Catacombs crowd.  Biden portrays himself as a victim.  He seems like the guy who licks the table tops clean.

Meanwhile, Trump is loud and brash and on television 24/7.  He is ridiculous.  But do you remember that inner circle, the dolts and morons who determined how prom was going to be run?  There's Trump.  He's the elected official who complains about the lowlifes at The Catacomb but takes the payoff to keep it running.  Those lowlifes keep him afloat.  So every time the Biden crowd cries about another Black man being shot, they have to overlook the facts surrounding the shooting while the insiders see only that.

Every Sinner a Saint.  Every Saint a phony.

The Idiot King is gaining in the polls while the Feeb fumbles with the margins.  It is going to be close, but I think Vegas odds are starting to change.

We'll have to ask Q while he's out there.  Perhaps he's already made his bet.

For the Billy Monk info. . . you are welcome.  We all wish we had done such a thing back "In Our Time."  As cheesy as it was then, it is an important record and a startling art today.