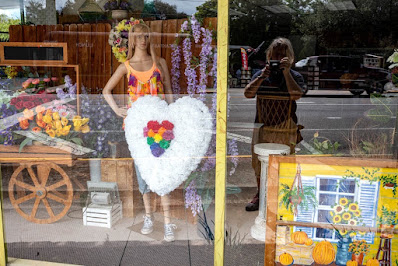 Well, it seems Q's vacation in Wonderland is going swimmingly.  He has led his family on a Thompsonesque romp to America's capital--Lost Vegas.  He reports that he wants to take his son on a romp through Vegas's downtown, to show him the Gonzo side of life and regale him with tales of Ecstasy laden nights with the strip's hookers. . . excuse me--performance artists.  As Thompson asserted, you can't out-weird Vegas.  It is a symbol of the American Dream.  It will commercialize anything or anyone.  It will offer up its riches and then break you.  In a spiritual wasteland, you take your pleasures where you can.  A boy needs to learn this early in life.

I've always had fun in Vegas.

But that's me.  I'm usually in bed by ten, although Vegas is a twenty-four hour town.  I hear much happens after midnight.  I have been there with friends who have told me so over breakfast a couple hours after noon.  By that time, I have been to the gym and had wandered the streets for hours.  I guess I miss a lot of the more colorful stuff.  Such is the life of an eternal sissy.  I like my sleep.

While Q is frolicking in the desert sun, I spend long hours reading and watching t.v. Too long.  When the sun goes down, earlier each night, I want to go to bed.  What else is there to do but watch more t.v. or read.  I've already done that the live long day.  I think I'm going to need to buy a video game console.  I can learn to steal cars and kill aliens, all the things I've never dreamed of.

I'm exhausted by all of this.

It is Saturday, I think.  I should do something.  But wait--it is a long Labor Day weekend.  People will be partying.  It is dangerous out there.  Young girls in string bikinis will be oiled up and sipping Pina Coladas by the score.  I wish I wasn't wearing these fifteen pounds of extra Covid fat right now.  I could head up to the retirement community and see if they have any barbecues by the pool, perhaps.  But no.  I have obligations and duties to attend to.  It is not so bad.  Mom and I can always sit out and argue about Trump.

I've been reading this morning about the QAnon movement in Germany.  Jesus Christ on the Cross, people are idiots.  There is nothing they love more than being stupid out loud, especially in groups.  Stupid sounds better when chanted by multitudes.  It is more convincing.

You have to give it to the Russians, though.  They are really good at this.  They've got a golden chain around the president's balls and all they have to do is give it a little tug to make him dance.  A Fifth Column fueled by conspiracy theory and financed by the Kremlin is one hell of a thing.

But you know, if it hadn't been for liberal academics feeling so fucking superior. . . but that's for another time.

Today's photo is an example of the excitement of the strip as I experience it here in my own home town.