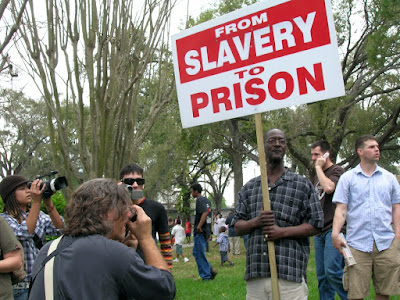 This photo is from 2006.  The KKK was marching downtown, and it drew a crowd.  I stumbled across some pictures I took from that rally yesterday and was slightly stunned at the contemporariness of the images.  Obama would be elected president in 2008.  How many lifetimes ago was that? 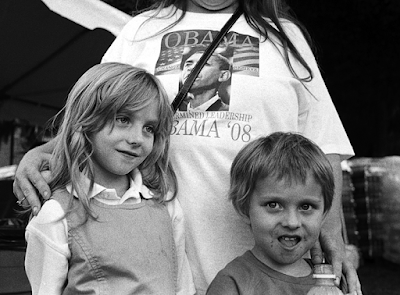 It seems that Trump has been president forever.  We thought it was bad living under a Nixon presidency.  Jesus, Joseph, and Mary, he seems practically benign now.

My art/travel buddy brought over a Biden/Harris sign to put in the yard yesterday with a warning: the campaign workers said to take the sign in at night.  Trumpers have been taking them down.

I sent this picture to my friend, a former colleague and boss from the factory, a black woman who grew up in the rural south. 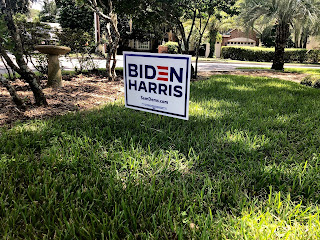 I included the warning my buddy had sent.  She replied: "You're worried about them stealing your sign at night?!?!?!  They're trying to steal the whole election in broad daylight!!!!"

The kids in that Obama pic would be in their twenties now.  They are old enough to vote.  I wish I could know which way they will go.  I put the Biden sign in my yard knowing it served no purpose other than to piss off some of my neighbors.  Nobody is going to drive by, see the sign, and think, "Oh, yea. . . I should vote for Biden.  The hippie who lives there is right."  My efforts would be better served by going door to door campaigning for Trump on his "Legalize Heroin and Abortion" platform.  Even then, I think, Trump supporters would just nod their heads and say, "Right on."  Or whatever it is that Trump supporters say.  They don't give a shit as long as its Trump.